From the convent to the halls of Goshen College 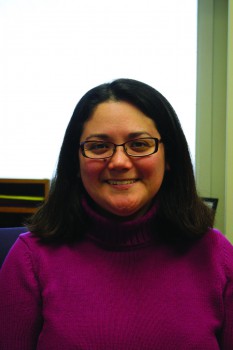 Sophie Metzger, assistant director of diverse student support at Goshen College, never imagined living and working in the city of Goshen. In fact, her first time in Goshen was entirely accidental.

It was the Thanksgiving of 2008 and she was driving to Ohio to visit friends.

“The first time I came to Goshen, I cried,” she said. “I was trying to get to Cincinnati.”

Metzger had missed the exit that she needed. Aware of her mistake, she simply continued on Route 33, where she saw a sign that said, “Welcome to Goshen.”  Metzger had never heard of Goshen, let alone where it was located on a map. She continued going south until she reached Main Street. She pulled into the Papa John’s on the corner of Pike and Main streets, where the early morning parking lot was empty.

Metzger finally made the decision to turn around and return to South Bend. Once she was home, she immediately fell asleep, exhausted from her experience.

A year and a half later, Metzger applied for the assistant director of the multicultural affairs office at Goshen College. The morning of her interview, she drove to Goshen from her home in South Bend. It wasn’t until she pulled up to the corner of Main Street and saw the Papa John’s that it all came rushing back to her.

Metzger finds her work at Goshen College meaningful due in large part to the students she has the opportunity to serve each day. It was the desire to serve and share in communal life that originally drew her to consider a religious vocation as a Catholic Sister.

While her work fulfills the call to service, it is the sense of community in the small town that Metzger especially loves. She lives just four blocks east of downtown Goshen and one mile north of the college campus, and she can walk to some of her favorite places like The Electric Brew, Maple City Market and Farmers Market. On “particularly adventuresome days” she can take the 25-minute walk to work, both actively clearing her head and getting her daily exercise.

“I get to live this ideal little local life in the first few years of my marriage,” she said.

“This ideal little local life” was not at all what Metzger had envisioned. Earlier in her life, Metzger had been certain that she wanted to be a nun. At first, she was reluctant to tell the story of considering becoming a Sister, because it was such a personal journey and she felt that people automatically think of “The Sound of Music” when they think of nuns. After some hesitation, however, she admitted that it was such a big part of her life that she needed to talk about it to accurately portray her life’s story. Of course, Metzger’s experience was much different than that of Sister Maria, though it did have a happy ending.

Born in the capital city of Oklahoma, Metzger lived outside of Oklahoma City for the first 11 years of her life. Then, her family had to move twice because of her father’s job with AT&T. Moving twice during that year made middle school even more difficult for Metzger.

She started school in St. Louis in August, so it was not too hard for her to fit in and make friends, but she encountered more difficulty when her family moved to Texas in January, halfway through the academic year. She attended Hobby Middle School, which she recalls was nicknamed “Snobby Hobby” and was known for being a place where it was hard to fit in. It was Metzger’s first encounter with racism, and despite the very diverse population of Texas, she didn’t appear “white” or Hispanic and was constantly teased.

Still, she never tired of trying new things and seeking a place to belong. Metzger joined band, formalized her Spanish language training, auditioned for plays and ran for student council. Through all of these efforts Metzger was able to make friends at the school, who remain good friends even to this day.

Metzger lived in San Antonio for another 10 years, attending not only high school there, but college as well. Texas had become a part of her life and her identity. “It was my heart’s home—where I grew as a person,” she said. “I learned to drive, and I worked, and I just learned the city.” Most importantly, San Antonio was where Metzger discovered that being a person of faith was important to her.

Her parents were never very religious, and, though she was raised a Catholic, Metzger received her first communion three years later than normal. When she was 10 years old, Metzger’s parents realized they needed to take her to her first communion. She was the oldest one there, and the tallest, which made her stand out from the rest and feel awkward. She hated the experience and didn’t understand the importance of it.

After her first communion, Metzger did not step into a church again until about five years later, when she was in high school. A boy she liked, Matt Medina, invited her to go to church to see his younger brother’s Christmas play. It was a strange request, but because she liked Matt very much, Metzger agreed to go, and the “whole idea of church was reintroduced into (her) life.”

Before settling on a church, Metzger wanted to look into other churches to get an idea of what other services were offered. She visited a Lutheran church, a Methodist church, an Episcopal church and a Catholic church, and narrowed down her interests to the last two. She ultimately found her home in the Catholic Church. After her “research,” Metzger felt like it was OK for her to continue to attend church with Matt, who soon became her first boyfriend.

After this, she felt a deeper spiritual connection and began spending all of her time in church. She attended Sunday school, taught some classes and joined every committee and group offered in the church. Altogether, she spent every waking moment there. She said at the time she needed a wider community and greater experience than her home life, which got to be quite lonely. “I found a sense of belonging at the church,” she said.

Metzger continually integrated religious aspects into her academic life throughout high school. Between high school and college, however, Metzger continued her research of different churches, and was first intrigued to find out if communities of vowed religious Sisters still existed. She became interested in knowing more about priests and especially nuns.

She had the privilege of meeting a nun at the church down the street from the church she attended. She became close to Sister Thérèse who gave her more information on the way of life and deepened Metzger’s understanding and interest in the lifestyle. Metzger began to explore the idea of becoming a Sister herself and felt a longing for a deeper meaning in life and a sense of spirituality.

Being a Sister wasn’t as much about what one would “do” with her life, but how one would “be” in relation to the world. She decided she wanted to study religion in college. Her parents were hesitant to support the idea because they were sure that Metzger couldn’t get a stable job with a religion degree. Because her parents were practical, they suggested that she teach, and Metzger eventually considered teaching religion. She only applied to one university, St. Mary’s University in San Antonio, and after receiving an impressive scholarship, her parents agreed to allow her to study religion, which they soon saw she was very good at.

While she was studying theology at college, she considered applying to a specific group of Sisters – the School Sisters of Notre Dame religious community, but she says, “It proved to be quite an ordeal.” To be accepted into the community one must go through countless psychological tests and interviews to determine if one is psychologically sound to be devoted to religious life and share in the community’s resources.

Though the experience was interesting and the testing was intense, Metzger felt that she was ready to enter “The House of Formation,” where she would begin to live the life of a Sister alongside other Sisters. Discovering that it takes up to 10 years for one to become a nun, Metzger decided that she was not ready to take this step in her life. She wanted a master’s degree, and after an entire day of prayer, journaling, crying, singing and contemplation, Metzger made the choice not to join the community.

Instead, she attended graduate school at Notre Dame and received her master’s degree in theological studies. The idea of becoming a Sister remained after graduate school. Metzger became a campus minister at the University of Dayton and began a relationship with a different community of Sisters – the Sisters of Charity of Cincinnati. She spent four years exploring a formal relationship with this group of Sisters. At the end of four years of prayer and relationships Metzger made the decision to move on and explore other life choices. Within the year, Metzger met her husband-to-be, which ultimately led her to Goshen College.

Metzger said she feels as though God has guided her throughout her life and helped her make important decisions that were ultimately the best for her. When asked if she has a vision for her future, Metzger said that she is simply taking life one day at a time, and she has faith that God will guide her and do what is best for she and her husband.

For this period of her life she feels honored to have the opportunities to accompany Goshen College students in joys and challenges of life. While working for the support of access to education and unity in diversity is not a direct application of her theological training, it is her ministry.