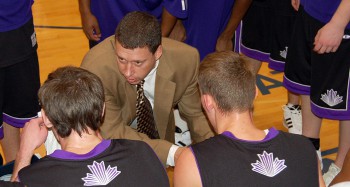 Under Chupp’s direction, the Maple Leafs won more games than they had for any other coach, surpassing the 87 won by his immediate predecessor Stan Daugherty. But on the heels of a tenth-place conference finish, Chupp’s 89-93 overall record will make him the eighth consecutive men’s basketball coach to leave GC with a sub-.500 mark.

The Maple Leaf job marked a homecoming for Chupp — the Goshen native graduated from Bethany Christian High School in 1987, and his career took him to Virginia, Pennsylvania, Ohio and Kansas before returning to his hometown in 2007.

His latest decision will mark a homecoming of a different sort, as he will leave behind the gyms of Indiana to pursue non-basketball opportunities with his wife, Melissa, and three children. In a statement released by the sports information office, Chupp said that “coaching at this level is a demanding job. As my children have gotten older, it has become increasingly more difficult to spend so much time away from them during a grueling basketball season.”

Chupp leaves behind a tenure with its share of both highs and lows. In 2010, Errick McCollum, then a senior, leapt at least three feet above the floor and dunked over a Grace defender; the video became a YouTube sensation and landed the Maple Leafs in SportsCenter’s top plays. Thirteen months later, Goshen pulled out a double-overtime road victory at Bethel that sparked a three-game winning streak over their local rival. The good news continued as Goshen won 12 of its first 13 games to start the 2011 campaign, receiving its first NAIA national ranking and peaking at No. 12.

The final season and a half of Chupp’s tenure will not be remembered so fondly, as Goshen finished the 2011-12 season by losing 12 of its last 17 contests. The Leafs entered the Mid-Central Conference tournament as the eighth seed; while they would drop a hard-fought 74-66 decision to Indiana Wesleyan, it would be the final game five players played for GC before transferring. Goshen missed the Crossroads League tournament in 2013 after a 1-17 conference season. Chupp’s final game was a 92-80 loss at No. 6 Indiana Wesleyan on Feb. 16.

Chupp coached more games at Goshen than ten of his predecessors; on a number-of-games basis, he was due to pass Jeff Birkey and become GC’s longest-tenured head basketball coach in January 2014. For the moment, his overall head coaching record stands at 212-229, a winning percentage of .481.

In the same statement, athletic director Tim Demant said that a national search will begin immediately for Goshen’s 14th head coach. Chupp remains hopeful for his now-former team, saying “We have a lot of important pieces coming back and with the addition of a couple impact players, I have no doubt [the search committee] will find someone capable of leading Goshen Basketball to the top of the Crossroads League.”