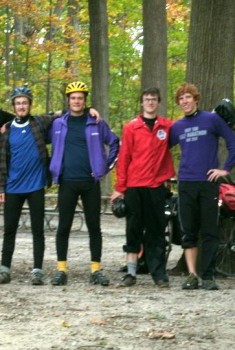 They’re biking from Paraguay to Goshen.

The men plan to attend the Anabaptist History course in Paraguay this May. Then they’ll meet up with Matthew Helmuth, a former Goshen College student, mount their saddles and cycle across South America.

If all goes well, they’ll cruise into Goshen ten months later, in March 2014.

Their idea began in 2010 through talks on their Miller 1 dorm couch. But Miller described their vision as a “pipe dream,” something they thought was “not gonna happen.”

Then the friends found out about the history course in Paraguay led by John Roth, professor of history. They realized the course could merge perfectly with their biking dream.

When Levi found out about Paraguay, Miller said, “He just visibly shook. He kept repeating, ‘It could work! It could work!’”

The next step was committing to the trip.

“We had to ask ourselves, ‘Are we really gonna do this?’” Stucky said.

The friends come from varied disciplines and backgrounds–ranging from art to informatics to biology–but they all share a passion for cycling. Miller, inspired by his father’s biking habits, biked to high school every day with a trumpet strapped to his back. Smucker grew up riding the hills of Lancaster County, Pa. Stucky was first enthused with biking after a short bike trip in college. Helmuth, meanwhile, was drawn to cycling for its sustainable transportation.

The team will start in Asunción, Paraguay, biking straight into the Chaco region, with roads they expect they “won’t be able to see the end of,” Miller said. They’ll work their way through Bolivia, Peru, Colombia, Costa Rica, Nicaragua, Panama, Honduras and Belize. In Ecuador,  Miller, Stucky and Helmuth will spend six weeks working on a farm, while Smucker will work in a clinic. Their last stretch will be through Mexico and eventually to United States.

As they go, they’ll stay with both pre-organized and improvised connections. Already, they have many connections established through professors, students, churches and people through various Study-Service terms.

Beyond their target, to bike over seven thousand miles, the team hopes to fulfill several goals. First, to practice and improve their Spanish language skills. Second, to learn about sustainable farming practices. Third, to continue their study of Anabaptism in Central and South America through interviews.

A central goal throughout all, Stucky said, is to have “human interaction in every place.” The team hopes to worship with local churches as they go.

“We want to ask questions of faith for every host we have,” Stucky said.

The trip was once an early vision, but now the team is prepping for the reality of what’s ahead.

“It’s going to be tough off the bat,” Miller said.

But the team agrees that they are excited for the approaching journey.

“At a slow pace of traveling,” Miller said, “you see a lot of things you wouldn’t see otherwise.”

The bikers would appreciate any connections readers may have in Central and South America. Follow their journey on their blog at panamericacycle.wordpress.com.