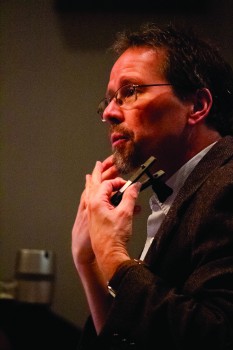 John D. Roth, professor of history, introduced a new project that he will be undertaking, “The Global Anabaptist Profile and Suffering Church Project,” at the 2013 C. Henry Smith Peace Lecture on Tuesday night. The peace lecture is an annual event delivered at Goshen College by a faculty member from a Mennonite college or university.

Roth’s lecture was titled “’Bearing Witness’ As Peacemaking: A New Martyrs Mirror for the Twenty-First Century?”  The lecture focused on introducing a new project that Roth will soon be starting, which will consist of collecting stories of adversity and suffering from members of the Anabaptist church at a global level.

The project is important in highlighting the hardships and persecution of members of the Anabaptist church in different areas of the world like Colombia, Congo and Indonesia. Roth’s project will move towards a focus on discerning what North American Anabaptists can learn from the suffering of Mennonites worldwide.

The idea of gathering stories of the “suffering church” in the Anabaptist tradition dates back to a book known as the “Martyrs Mirror,” which was originally published in Dutch by Thieleman J. van Braght in 1660. The book was a collection of stories that recorded the acts of martyrdom borne by people who were persecuted for their beliefs.  The book has been translated into many languages and reprinted many times over the years but has not been updated with global stories.

The C. Henry Smith Peace Lecture awards a presenter with a research grant and a chance to present their lecture at both Goshen College and Bluffton University in Bluffton, OH.  The lecture is named after C. Henry Smith, who served as dean of Goshen College from 1908-1913 and as chair of Bluffton University’s history department from 1914-1946. Past lectures have included topics like the plight of pacifist Hutterites during war, building peaceful relations between Muslims and Christians and forgiveness in light of vengeance.