What happens to our leftover meals? 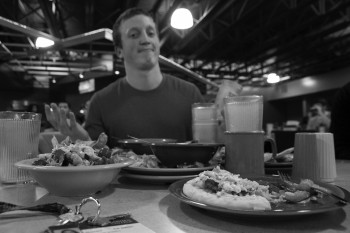 Goshen College students were barred last semester from donating leftover dining hall meals to the homeless. Since then, some students are left wondering what they can do with their unused meals at the end of the semester.

“Since I lived in campus housing, I had to have 80 meals,” said Jenae Rupp, a senior nursing student who wanted to donate her unused meals last December. Rupp, along with seniors Saralyn Murray and Jan Zawadzki, facilitated a Facebook group with the intention of enabling students across campus to donate their unused meals.

“I figured those [meals] were ‘mine,’ to use as I please,” said Rupp. “With about three weeks left of school, I thought it would be cool to bring boxed lunches to Faith Mission in Elkhart for the homeless.”

“I feel like if the meals are paid for,” said Murray, “they are required to give me all the meals if I enter the dining hall for every one of those. So why is it I cannot donate my remaining meals to the homeless?”

As Rupp and Murray contacted Goshen’s food service provider, AVI Foodsystems, Inc., Zawadzki looked for answers within the school’s administration. “They told us that ‘it’s not going to be possible this year,’” said Zawadzki, “and that’s where it kind of ended.”

Rupp, Murray and Zawadski said they were simply looking for a practical way to avoid wasting meals that they paid for. “It still makes no sense to me why I can’t use a set amount of ‘pricey’ meals that I paid for in the way that I please,” said Rupp, “let alone to help a homeless community.”

Donating meals is proving more difficult than students perceived. “It gets complicated in a hurry,” said vice president for Student Life, Bill Born. “It’s just not that simple.”

“It is a given that not all the meals available to students will be eaten,” said Jim Histand, vice president for finance at Goshen College, who works with AVI to negotiate food costs per semester. “Pricing is determined based on expected usage, which is always less than 100 percent of the ‘possible’ meals.”

According to Histand, AVI works with Goshen College in a 10-year contract, which is renegotiated each year. The amount that the school pays directly to AVI for food services is based on participation rates from previous terms. Since that amount is paid on a per-semester basis, meals cannot roll over between semesters.

On average, the meal plan participation rate is 60-70 percent, meaning that it is expected that students will not use all of their meals. “So pricing is ‘lower’ than it otherwise would be if 100% participation rates were assumed,” said Histand.

Histand went on to say that AVI does its best to avoid wasting food as much as possible. As Born put it, AVI “is a business entity too. They can’t be here and not make money, because they’d go under.”

After AVI charges Goshen College for the projected cost of that semester’s meal plan, Goshen College then charges students for a specific number of meals. The direct exchange that takes place when a card is swiped in the dining hall, according to Born, gets lost in the actual transaction.

According to a representative from AVI’s corporate headquarters in Warren, Ohio, each contract is designed on a case-by-case basis. The school determines what their needs are, and AVI adjusts their costs to accommodate those needs.

The representative from AVI said that if Goshen College wanted a plan that enabled leftover meal donation, it could be done but would ultimately cost the students more.

“It would be simpler for students to just contribute out of their ‘own pocket’ by buying groceries and donating to those in need,” said Histand.

According to Born, donating groceries purchased with extra Munch Money is a much more viable option, since he says it is “a more direct exchange between the student and AVI.”

For many on-campus students who are required to pay for a meal plan, it becomes difficult to make use of all of their meals, Zawadzki said.

“I was gone on weekends,” said Rupp, “worked during most evening meal times, and had clinical during many of the lunch meals.”

Since it is contractually impossible for students to donate their unused meal plans at this  time, students will need to ask themselves if it is worth it to pay more for a meal plan that allows them to donate unused meals.

“I would do it,” said Zawadzki, “and I think most GC students should do it as servant leaders–but I’m still hesitant as to how realistic it is.”

For students at UCLA, University of Southern California, University of Texas San Marcos and others, it has become very realistic. UCLA students started a non-profit organization called “Swipes for the Homeless,” according to an article on the Supplemental Nutrition Assistance Program’s website.

Students at Goshen College that are concerned with donating unused meals, according to Born, should pose that question to student leaders such as those in the student senate.

Such a renegotiation would increase the participation rates, Histand said. “Prices would have to be increased for all students, even on those who don’t want to participate in ‘giving away’ some of the meals.”

“If it were me, I wouldn’t get a meal plan,” said Zawadzki, “but since I live in the apartments, I have to get the lowest meal plan of 45 meals.  That’s why I think we should at least be able to give something back to the community.”