Students perform as witches, pirates for "A Night of Opera" 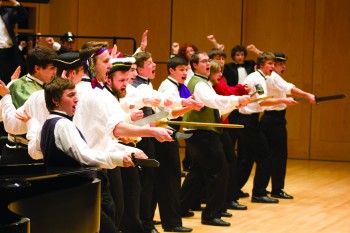 The choirs, directed by Scott Hochstetler and Deb Brubaker, performed selections from a number of different operas, including “Otello,” by Giuseppe Verdi and “The Pirates of Penzance,” by Gilbert and Sullivan.

The GC choirs perform an annual winter concert, but this was the first year they gave an opera-themed concert. The decision to do opera was one that Hochstetler was eager to make.

While in college, Hochstetler found a personal love for vocal performance, especially opera.

“It is a wonderful art form for students to learn,” said Hochstetler, “as it combines full-throated classical singing with over-the-top acting.”

In their concert Sunday evening, students acted as monks, soldiers, witches, pirates and other theatrical characters — all while singing bold operatic selections with many choral parts.

Ben Ganger, a first-year, had the opportunity to sing two solos in the concert. Ganger thoroughly enjoyed the experience of performing the music and the “drama” and “goofiness” that came with it.

“It was definitely my favorite concert this year,” said Ganger, who hopes to continue studying opera in the future.

Despite the difficulty of performing music that required such a large, open-throated sound, Hochstetler believes that the students enjoyed and benefited from “A Night of Opera.”

“The process was quite difficult,” said Hochstetler, “mainly due to singing in French and very fast Italian — in addition to English.” He also recognizes the demanding work of the staff accompanists, who learned to play almost all the orchestral parts on the piano.

Hochstetler points out that the collaborative nature of the concert is what made the experience especially enjoyable for the performers. Singers from Fairfield High School sang two numbers near the top of the concert. Yoder, a former GC grad who is currently studying vocal performance at the graduate level, filled the concert hall with music as she sang a solo in a piece from the 1870s opera, Die Fledermaus.

Including Yoder’s performance, the concert featured singers from all levels of schooling — high school, college and graduate. Many of these students had not been previously exposed to opera, so for them it was a chance to try something new and share the theatrical side of music with others.