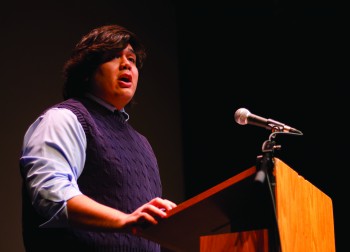 On Tuesday night Jacob Putnam, a sophomore, won the C. Henry Smith Peace Oratorical Contest, taking home $500 and the chance for his speech to compete in the bi-national contest.

Putnam explained the problem: less than one percent of the unexploded ordnances have been disabled in Laos and the U.S. is not spending enough money to get rid of them.

Putnam clarified that, though the United States invested $3.1 million to get rid of the undetonated weapons, the U.S. spent $17 million a day for almost nine years bombing Laos. Putnam said, “You cannot honestly tell me that the USA cannot increase funding.”

“So what can we do about this appalling problem?” Putnam asked. “Thankfully, you all have the opportunity to save their lives. You’ve already taken the first step by listening to this speech; you’ve already become more aware. It’s now up to you to build that awareness for people around you.”

Peace, the uniting theme of all the speeches, opened doorways to new issues and calls to change.

Runner-up Abby Deaton, a sophomore, spoke about how “if we are called truly to be peacemakers, then it time for us to serve those in service.”

“We have a crisis on our hands and in times of crisis we are called, as peacemakers, to serve others, so why are we just sitting here?” Deaton asked. “It’s not about war or peace, it’s about those suffering and those serving. It’s about warriors and it’s about peacemakers. What I’m asking for is a change of heart.”

Jeffrey Moore, a senior, echoed Deaton in his speech about the disease of “tribalitis” and polarization in society, stating that “the only real cure to tribalitis is a change of heart.”

Mara Weaver, a senior, spoke about privatized prisons and the suffering they create. To emphasize the need for change, Weaver told the audience, “I’m telling you now it’s worth the fight.”

Marcelle Al-Zoughbi, a senior, spoke on the divesting of corporations that oppress Palestinians. She explained that successful divesting could allow “peace thoughts to begin, with a real chance of lasting peace.”

Many variations of peace were described, and yet the same call to action appeared: a call to change and a call to humanize others were common threads in the speeches. Pat Lehman, communications professor and contest coordinator, said, “I think we had superb speeches. I feel like they’re all winners.”

With a $500 first prize on the line, the speeches were expected to be well prepared and thoughtful, but the contestants said they decided to compete for more personal reasons.

“When I talk with the finalists, what they say is, ‘we’re so glad to have an opportunity to speak about an issue we care deeply about,’” Lehman explained.

Moore echoed Lehman when he said, “We are able to share issues that we care about. That’s what matters.”

Al Meyer, a two-time participant and one-time winner of the contest, spoke on the importance of speech in life: being able to express clearly what you believe and the subject of peace. He added, “It’s a good cause and because of that, I’m a strong supporter.”

Faculty, contestants and community members agreed that the competition was about more than the money. It was about peacemaking and spreading knowledge.

Lehman and Moore both urged the audience to think seriously about the topics presented. Lehman added, “Listen and learn together.”

Peace was the theme of the night, and Putnam concluded, “Take the time to change the world.”