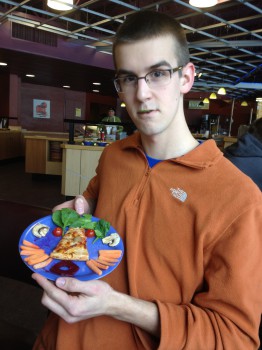 John Miller hasn’t always considered himself an artist. “I didn’t realize that what I did with my food could be considered art,” he said over a meal at the Rott. “Now that I consider it art, it is.”

Miller, a junior physics major, has been making faces out of his food since Tuesday. He said the idea came to him while thinking about potential articles for the Funnies page.

“I’m usually pretty methodical about picking foods that match well on my plate,” he said. “Like, today I picked a blue plate so the carrots would really pop. Too bad the Record doesn’t publish the Funnies in color,” he added. He’s right.

“Most people don’t realize how versatile an art form food is,” he continued. “If you think about how artistic the process of cooking the food is, combined with me making it into a face, it’s like, double the art.”

Miller’s latest work, pictured with this article, is untitled, but he remains open to suggestions. He said he enjoyed the challenge of working with a medium that wasn’t entirely under his control. “The piece of pizza I got for the nose had a sausage on it,” he said. “Now it’s like the face has a mole.” Miller was also forced to use spinach for the hair because the Rott was out of peas that day.

Working with a new medium has been more than just an artistic challenge for Miller. Despite being an omnivore, Miller’s work with beets, spinach and other vegetables has helped him appreciate the decision of some people to be vegetarians. “In general, I try not to eat too many vegetables,” Miller said. “I was going to compost all this stuff after I finished making the face, but Josh Yoder said I had to eat it all. I couldn’t finish the last tomato, but the rest of the vegetables weren’t too bad.”

When asked about his plans for the future, Miller replied “it depends how long my Munch Money lasts. I guess I’m kind of like Van Gogh in that way. He had to choose between buying food or paint, and I have to choose between eating my food and turning it into art.”