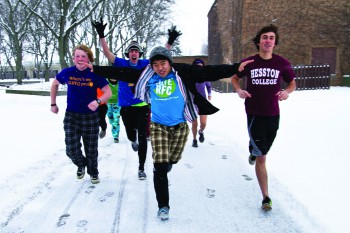 About a dozen students ran through the snow during Java Junction’s Half-Naked Half Mile charity event on Saturday, Feb. 2.

The Java Junction management team helped coordinate the run. There were three checkpoints along the half-mile course. After starting out, participants took off as many articles of clothing as they needed at each checkpoint. The idea came from a show that highlighted Greek events on a state university campus.

The event was designed to collect clothing for The Window, a local non-profit that provides basic needs for limited income families and the elderly. Three large trash bags full of clothing, shoes, scarves and gloves were collected by the end of the evening.

“We had a smaller group [of runners], but they were very energetic,” said Hannah Bartel, a senior and the event’s marketing coordinator. “We really appreciated their enthusiasm. Several other people donated clothes afterwards.”

Approximately a dozen people helped organize the run. Jama Yoder and Rachel Smucker, both sophomores, planned the event while Bartel worked on the marketing aspect of the run. Jared Miller, a junior, contributed by leading the Half-Naked Half Mile participants around campus.

“I had clothes to donate and it was advertised well,” said Seth Krabill, a participant in the run. “It seemed fun.”

A Facebook group created for the event gave information regarding the time, place and dress code of the run. The goal was to be in shorts and a t-shirt by the end of it.

The weather was a concern to some, but people still showed up despite the snow.

“The weather might have turned some people away, but it was really cool to see people show up,” said Smucker.

Smucker said that the Java Junction crew wanted to serve the community without just gathering and dropping off clothing at a Goodwill. “There were a lot of scarves and gloves, which is good because we are facing colder months ahead,” Smucker said.

The management expressed their gratitude to all those who participated and to those who donated clothes afterward. Java Junction accepted donations through Feb. 6.