Shouting to God from Cambodia 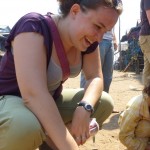 Here in Phnom Penh, I have the uncommon experience of living with a Christian family. My “parents” (they’re in their 30s, more like siblings than parents) both joined the church as young adults, which is how they met. Neither of their families are Christian. In a country that is primarily Buddhist, my family stands out. We do uncommon things like pray before meals and go to church on Sunday mornings. For me, it’s a strange dash of the familiar, in a culture that is so different from what I’m used to.

A few days ago, as we were waiting to eat dinner, my dad pulled out his guitar and began to sing in Khmer. I recognized a few words like “Jesus” and managed to put together that he was singing praise songs. After a few, I realized he was singing a song that I recognized … not the words, but the tune. So I began to sing along in English. The song ended, and I was pretty happy that I had gotten to sing a little bit, but figured I probably wouldn’t know any of the other songs he would play. But, to my delight, I knew the next song, and then the next song, too. So, here I was, sitting halfway around the world, singing songs that I have known for years. We continued for a while, praising God in two languages.

Now, if you know me, you know that I’m not always the most spiritual or religious of people, but I’ve been known to have my moments. The first morning we were in Cambodia, after having arrived late the night before, I found myself watching the sunrise from the roof of our hotel, hearing the city awake around me. I was filled with happiness at the opportunity opening before me. Spontaneously, I found myself singing aloud. Some of you may know the song, “Shout to the Lord.” It’s about praising God for the things God has done, that nothing comes close to what we find in relationships with God.

Back to that night at my house, singing. I was in a somewhat negative state of mind, missing my family and friends in the U.S. and comfortable enough in the routine of each day that it wasn’t really exciting anymore. After about 10 minutes of singing, my dad started another song. Can you guess what it was? Yep. “Shout to the Lord,” the very song that had come to me about a month before. It was almost like God was saying to me, “OK, Sarah. Don’t forget the wonder of that first morning. Don’t forget that you’re where you’re supposed to be, even if it’s not happy every single moment.”

I realized that I hadn’t been thinking much about God … I was too caught up in all the new things I was experiencing. So I stopped and took a moment to journal about what had just happened. I have this great journal, that has a Bible verse on every page and says “Keep calm, and pray on” on the cover. As I finished recording what I was feeling, I glanced down at the verse on the page I had filled. Of course, it had everything to do with what I had just written. (Galatians 2:20, look it up).

So, I want to end my somewhat random ramblings with a prayer that I turn to when I’m having a down day. It was given to me by someone before I left for SST, along with other motivational things. It’s a prayer that I think is useful to everyone, but especially SSTers in an unknown place. It reads:

“May today there be peace within.
May you trust God that you are exactly where you are meant to be.
May you not forget the infinite possibilities that are born of faith. May you use those gifts that you have received and pass on the love that has been given to you.
May you be content knowing that you are a child of God. Let this presence settle into your bones and allow your soul the freedom to sing, dance, praise, and love. It is there for each and every one of us.
May today there be peace within.”

Sarah Lake-Rayburn is a junior theater major. She is currently on Study-Service Term in Cambodia.