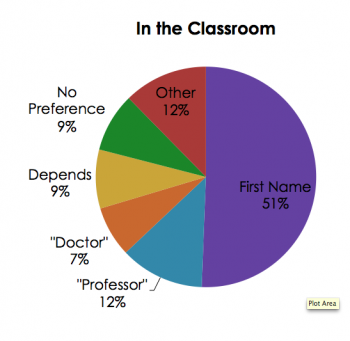 Two weeks ago, The Record published an article about the preferred titles of certain Goshen College faculty. The Record has since conducted an anonymous survey to gain a better understanding of faculty preference for how students should refer to them in various settings, and discovered a variety of opinions.

While 52 percent of the 80 faculty member respondents prefer to be addressed by their first name in the classroom, 13 percent prefer the “professor” title, with another 8 percent preferring “doctor.”

The remaining 19 percent listed other preferences, such as “coach” or “madame,” or said they felt it depended on the situation.

Generally speaking, faculty members at Goshen College are comfortable with a first-name basis.  Some prefer to be called by their formal titles outside of the classroom.

Most professors are more concerned with tone than with specific titles.

When it comes to emails, the issue of tone comes to the forefront.  Whether a professor is referred to as “doctor” or by first name is often not as important as respect and personal responsibility on the part of the student, many professors said.

Some professors mentioned that they recognize the need for a professional friendship mentality with students, but that does not mean that they are considered peers.  After graduation day, the world outside of college begins, a world where there are clear lines of respect, in which titles are important.

Recognizing this reality, one professor worries that students will not have enough preparation in terms of respecting authority figures through communication–wherein titles matter.

Even though the discussion of formal titles has sparked many opinions within Goshen faculty, 56 percent of survey respondents do not want any standard protocol for how students address them.  Only 14 percent believe a standard should be put in place, while the remaining 30 percent thought it was a possibility or were undecided.

“I try to tell students that they should find out each professor’s preference,” said Steve Nolt, professor of history at Goshen College.  He went on to say that his students should “not assume that just because it’s OK to address me on a first-name basis that they should address every faculty member that way.”

Professors at Goshen College are given certain liberties in their teaching styles, including how they are to be addressed in different situations.  Some prefer to be called by professional title from first and second year students, but go on a first name basis when students have had several classes with the professors.

The general opinion of the Goshen College faculty was that the focus of this discussion is respect.  Many professors believe it is simply up to the professor to express how they would like to be addressed in every course they teach, while students should be aware and respectful of the professor’s position.

“I most value my relationships with students here at Goshen College, and I believe that our ‘first name’ culture facilitates that,” one professor said.  “I do, however, feel that it is important that students treat faculty with respect, and recognize that they have a lot to learn from every faculty member, regardless of his or her degree.”