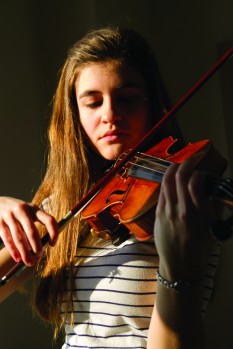 This past Saturday, eight Goshen College students performed at the 53rd Annual Goshen College Concerto-Aria Concert. The soloists were accompanied by the GC orchestra, under the direction of Christopher Fashun, assistant professor of Music.

Just under one hour, the concert included musical selections from a variety of composers — from Mozart to Puccini. The student performers chose their own pieces and then put in many hours of rehearsing time on their own.

In November, members of the GC Music Department held auditions for students wishing to be a part of the Concerto-Aria. Of the twenty-some students that auditioned, eight were selected to perform in the concert.

The eight performers not only mastered difficult music, but they also had the experience of performing with a full orchestra. Although a valuable experience, many of the performers agree that it is unlikely they will perform in the Concerto-Aria again next year. But despite the demanding practice times and high level of difficulty in the music, the annual Concerto-Aria will return again next year — and with a whole new array of talent.