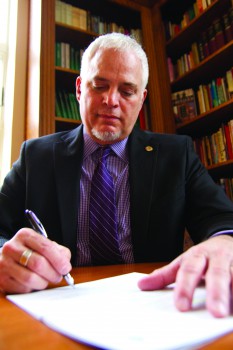 President Jim Brenneman penned his support for increased gun control legislation by signing the Open Letter to Our Nation’s Policy Leaders. The document was co-written by two university presidents, Elizabeth Kiss of Agnes Scott College and Lawrence M. Schall of Oglethorpe University, and signed by some 350 other college or university presidents.

Brenneman was approached by Kiss in December to add his name to the list of educators who support putting an end to gun violence through more education, stricter regulation and increased legislation. “Open Letter to Our Nation’s Policy Leaders” was received by the White House, with a returned confirmation letter.

The open letter was written in direct response to the shootings of 26 innocent people in December 2012, many of whom were elementary school age children, at Sandy Hook Elementary School in Newtown, Conn.

“When the Sandy Hook incident happened, it was like a straw that broke for me,” said Brenneman. “I found myself weeping for the parents and Newtown community… And, my sorrow turned to outrage at the senselessness of our gun laws. I felt that one of the ways I could deal with this outrage and sorrow constructively was to offer the moral weight of being the President of a Christian college to speak out about this matter.”

The letter addresses the “senselessness” that Brenneman mentions in a list of calls to action, which call for policy makers to oppose legislation that allows firearms on campuses and class rooms, to end loopholes that allow the purchase of firearms at gun shows, to reinstate a ban on military-style guns and to work to increase safety standards and requirements for the manufacturing of firearms.*

“The time has long since passed for silence and inaction on the issue of reasonable and rational gun safety legislation,” reads the first statement in the concluding paragraph of the open letter, suggesting that stricter regulations on gun violence are an immediate need. This sentiment is being echoed nation-wide, and is beginning to become a more pressing issue among leaders in Washington.

On Tuesday evening, President Obama focused his State of the Union address on the issue of gun control. Also in attendance were former Arizona district Rep. Gabrielle Giffords, a gun violence victim and advocate for stricter gun laws, and the parents of Hadiya Pendleton, a 15-year-old victim who was shot to death last month. Their presence at the event sent a message that the government intends to increase legislation.

However, to Brenneman and the writers of the open letter, stricter laws are only part of the equation toward preventing incidents like the Sandy Hook shooting. Education and conversation, Brenneman said, will create that change.

“I hope for more education around the topic so that we can distinguish between the nature of the right to carry a weapon and the nature of why people do,” said Brenneman. “Are we open to having conversations about who is to blame? And, why is there a culture of violence?”

Brenneman made the decision to voice his opinion immediately after receiving word from Kiss about the open letter and its purpose.

“It was a gut reaction to sign the letter,” said Brenneman. “I don’t often make these public declarations, but when I sent my decision to other administrators I got a response back that they also felt it was a no-brainer [to sign].”

The group of 350 presidents come from different backgrounds and diverse institutions, though as a group have formed a cohesive opinion: that change must occur.

Their sentiments, as expressed through this excerpt from the letter, reflect that desire for immediate change.

“We are college and university presidents. We are parents. We are Republicans, Democrats and Independents. We urge both our President and Congress to take action on gun control now.”

A more detailed list of the action statement, and a full copy of the letter, can be found at collegepresidentsforgunsafety.org.