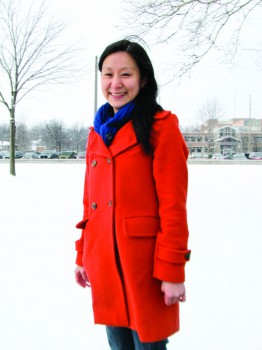 Yumi Otsuka is a sophomore nursing student. She came from Japan to the U.S. at age 15 to attend Bethany Christian High School. She says the experience helped her to brave life’s challenges.

Tell us about traditional Japanese clothing.

What is the influence of the Japanese monarchy?

We have an emperor and empress, and a prince and princess as well. They live in the middle of Tokyo. Their role is to go to foreign countries and maintain good relationship between Japan and other countries.

During war, their role is to announce the end of the war. But right now they don’t have power at all. And everything is controlled by the government, which we elect. So we have a say on our political culture. The issue of having a monarch is not something that we complain about or something we love. They are the symbols of Japan, and we respect them.

During New Year’s, there is a practice where they come out of the balcony of their palace and people like me–ordinary Japanese–wave at them. The emperor speaks what had happened last year and tells [what will happen] during the coming year.

Sumo is a well-known part of Japanese culture.  Is it still considered a recognizable national sport?

I have been to sumo wrestling–it is actually interesting and exciting. You feel awkward when you see those sumo players almost naked. But the stadium gets heated once they show up. Instead of watching them on the TV it is fun to see them at the stadium.

In Tokyo, there is a part of the city that is mainly occupied by the sumo stadiums. It also includes different sumo training centers. People who take part in the sumo training will have soups to eat, prepared in a big pot. The strongest sumo eats first. If you are pretty new to the sumo training center, you will be the last person to eat, and you are expected to clean it up. This is all what I hear about the Sumo. The trainees live at the training center and are expected to clean up the stadium so as the professionals can practice when they arrive. They do have a lot of respect for each other, as part of the Japanese culture.

Is the act of bowing during greeting related to sumo?

It is not only in sumo, it is in general life that we have to respect [each other] by bowing. When you are walking in a campus, for instance, when you see your professor you have to bow. It is not so deep but a little bit of bowing – just to show respect.

Speaking of respect, I was very surprised that students were allowed to call teachers or professors by their first name the first time I came to the U.S. In Japan this is not acceptable at all. You always have to attribute with “Mr.” and “ Mrs” or their official title. Having heard students call their professors by their first name was at first unique to me. I am used to it now.

What are the commonly served foods in Japan?

I was used to eating vegetables and rice. But here most of the time it is potatoes, corn and meat. I really miss Japanese food. When I go home, I eat home-cooked Japanese food. There are Japanese foods like tonkatsu (Japanese pork cutlet), katsudon (pork cutlet rice bowl), okonomiyaki (Japanese pancake), and buta kimchi (pork and kimichi stir-fry).

Where were you during the 2011 earthquake in Japan?

I was here when the earthquake happened in Japan. When I went home, I [volunteered]  to help victims of the earthquake. It really was an eye-opening experience for me to see the affected areas. I had a chance to help and to talk to people there. Though it was not for a long time, I feel I made an impact on the lives of victims, and this makes me happy. I really recommend GC students to get involved in volunteering activities in their areas.

–    For many Japanese couples, Christmas is celebrated like Valentine’s Day.

–    There are four different writing systems in Japan: romaji, katakana, hiragana and kanji.

–    Some men in Japan shave their heads as a form of apology.

–    Japan has  produced a total of 15 Nobel laureates in the fields of chemistry, medicine and physics.