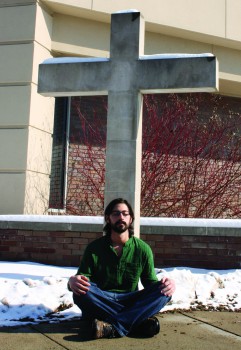 By Mike “Has to Go to Chapel” Zehr, Funnies Writer

It seems there has been a slight miscalculation to my semester without chapel experiment, due in part to lack of planning and forethought (and, admittedly, my own cognitive shortcomings). A recap for those who may not have read my last article several weeks ago: this semester was meant to be a “thought experiment” where I would attempt, in the name of science, to answer this question: how does a semester without chapel affect a college student’s delicate psyche and spiritual livelihood? The experiment was also somewhat of a quest to venture the possibilities of two added hours of free time each week.

The experiment was launched successfully, data was being collected, observations made and I was well on my way to supporting my hypothesis. I was indeed getting two extra hours of sleep each week as I had predicted. However, things were interrupted Monday when, upon further review of the primary literature, I came to the realization that I am in fact not exempt from chapel. I suppose maybe this is karma getting back at me for gloating via The Record, or maybe it’s a blessing in disguise. Either way, I’m ticked off.

You may be asking yourself, “Mike, what’s the deal, yo?” Well, stranger, the deal is that I still have long hair, and I still don’t care. But really, I thought that since I live off campus and I don’t have class before 11 a.m. that I would be exempt. As it turns out, the key hour to be observant of if you’re planning on living off campus in the future is 12:00 noon. The bright side of this whole ordeal is that I extracted some tender information from Becky Horst, chapel coordinator, while discussing my options with her about my inevitable deficit. I’m quite sorry for exposing this secret, Becky, but seniors, it seems the administration is willing to forgive up to five missed chapels, no questions asked. This means, assuming you have no other deficits to make up—which for some is probably a laughable matter—that the required number for this semester is 10 rather than 15. You’re welcome. See you all in chapel tomorrow.