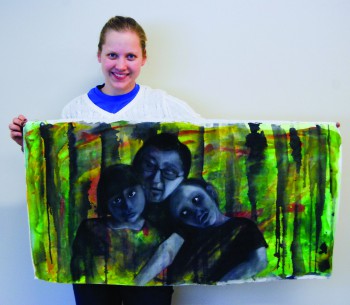 Like many budding artists in schools around the world, Laurel Woodward found herself utilizing the margins of her note growing up. “It wasn’t only sketches,” she said, but doodles and lettering, too. Woodward’s early love for drawing has led her here, preparing for her senior show as a fourth-year art major.

Perhaps because she had always enjoyed sketching, she said, “Figure Drawing sophomore year was a class I fell in love with.” Woodward found the intimacy of figure drawing to be a subject full of potential. Drawing has always been her preferred medium, and sketching her favorite style. But as she began to prepare for her show, the question she found herself asking was, “how can I push sketches and figure drawings into presentational pieces?”

To that end, Woodward has begun to explore sketches as polished pieces, also pushing herself to work with treated canvas. For the show, Woodward prepared canvases using paint and india ink, then sketched on top with either charcoal or conté, a compressed pigment. In order to preserve the sketch-like quality of her work, Woodward maintains a connection between the background and the subject, often blurring the distinction between the two. The background may show through the subject above, or the edges of the subject may soften and fade into the background.

Woodward has always been drawn to art, but more recently realized that she wanted it to be a constant presence in her life. It was this conviction that led her to declare an art major. As she looks ahead to life beyond this semester, Woodward sees it as her “challenge to always incorporate art” into whatever she does. She sees a lot of overlap between art and her other interests, which include minors in music and conflict transformation studies. Art, just like music, has the power to tell a story. And hearing and understanding one another’s stories is integral to conflict transformation. Though her art has been “mostly introspective so far,” Woodward would like to see herself begin to take on others’ voices as well, perhaps even in a role that may foster some sort of conflict transformation.

To Woodward, “art has the ability to create community,” something she has definitely seen in preparing for her show. As figure drawing cultivates a more intimate connection between artist and subject—as well as art and viewer—Woodward has found that her art has sparked conversation between individuals, helping to build community. It is in this conversation that Woodward sees all of her interests overlap.

With the art show roughly a month away, Woodward is still pushing herself to explore new methods of telling a story: she’s currently working on a larger piece, a seven by four foot canvas, to join a series she has already begun (a series which includes the painting in Woodward’s photo above).

Be sure to catch Laurel’s art at the first senior art show, beginning with a reception at 2 p.m. on March 10, that will run through March 27 in the Hershberger Art Gallery.