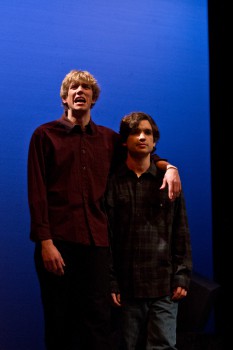 A new semester of theater productions begins with an ending as Billy Funk wraps up his work in the theater department with his senior recital, Billy Funk’s Triple Showdown with Reality, this Friday at 8 p.m. in the Umble Center.

Funk’s recital is comprised of three one acts: Interface by Mic Weinblatt, directed by Sammy Rosario, a senior; Eukiah by Lanford Wilson; and Degas, C’est Moi by David Ives, both directed by Phil Weaver-Stoesz (’12).

Each script is unique, said Funk, but the three are held together by the main characters’ struggle with “embracing reality,” a theme that carries personal significance for the senior.

“Being at Goshen … mostly in my early years, people were always telling me I’m funny. I cared a lot about what people thought of me,” said Funk. “Everybody has a really good idea of who you should be, I think. Everybody knows what somebody else should be doing, and nobody has a clue about their own life.”

“So this show is about embracing your reality and asking the hard, critical questions about yourself, and trying to figure out who you are—for yourself—because you’re the one who has to live with it.”

Funk concluded, “And ultimately, that vulnerability is really beautiful.”

In addition to carrying personal significance for Funk, the differing scripts allow him to display his versatility as an actor.

Both directors commended Funk for his commitment to demonstrating such flexibility.

“He is very motivated and driven,” said director Rosario. “Even in my  scene he does a variety of characters. His sense of exploration has been inspiring.”

For Funk, the most inspiring part of putting together his recital has been the cast and crew.

And simultaneously, said Funk, he’s been able to “incorporate people who you never see on stage,” but are “very close” to him, playing significant roles in his day-to-day life.

And while Billy Funk’s Triple Showdown with Reality may mean the reality of no more GC productions, Funk does not consider this the end of his career.

“I look forward to the opportunity to do more, because I feel like I’m still getting started,” said Funk.

The show is one night only, this Friday at 8 p.m., with a reception to follow. Admission is free.