Behind the wheel on SST 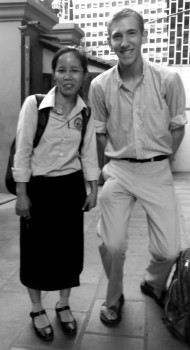 If you’re reading this you probably know a lot about the hardships and struggles people experience on SST, either from your own experiences or from talking to people who have gone already. If not, well, ask someone about it.

What has stood out to me the most in Cambodia is the traffic. At first glance, the constant flow of moto-dups (a motor scooter), tuk-tuks (a motor scooter with a carriage), cars and bikes seems to have no rules. And that’s basically true. Once you head into this crazy swarm of honking horns and roaring engines, two rules, which are more like guidelines, emerge. Try not to stop, and don’t hit anyone. Incredibly, this works out quite well. Traffic moves along at a decent pace with motos swarming between cars and everyone eventually making it to their destination. One of the coolest things is crossing a busy street: all you have to do is slowly and predictably walk across and everyone will move out of the way or slow down for you.

The first week we were here, everyone had to take motos and tuk-tuks around the city, directing the drivers in our limited Khmer. Finally, during our second week we each received our own bike. This gave us the freedom and excitement of biking ourselves around the city. Personally I get a huge rush as I bike along, weaving in and out among traffic and finding any gap to squeeze through. Even the sidewalk is fair game here. I feel like I’m in that movie “Premium Rush,” except I’m not Joseph Gordon-Levitt.

While the adrenaline junkie in me loves traffic for the thrills, it has also been an interesting window into the culture and psyche of Cambodia. When you’re on a busy road and coming to a cross street, many times people trying to cross or merge will just pull out in front of traffic in their effort to get across. Everybody else will slow down and weave around that person and everyone goes on their way. When this happens to me as I cruise around town, I tend to get frustrated or annoyed with having to slow down and avoid people. In Cambodia, I am alone in this feeling. I look at the people around me see them gladly letting someone pull out in front of them. The people here have a friendliness I’ve seldom experienced before, especially with strangers. My favorite example of this was the time I went to pass an old man on a bike with his wife riding on the back holding the day’s groceries. As I passed him, he called out and sped up to match my pace. We then had a lengthy conversation, half in Khmer and half in English, about what I was doing in Cambodia and my interest in the country, all of this while biking down a busy street.

The people of Cambodia have been amazing hosts to our SST group and I can’t wait to learn more about this country. See you stateside.

Seth Miller is a physics major. He is currently in Cambodia on Study-Service Term.