What should Goshen College students call their professors?

Goshen College prides itself on a professional yet inviting academic atmosphere where students often refer to professors by their first names.

While a majority of GC professors prefer to be addressed by first name, there are a variety of preferences within multiple departments. Some faculty members, including several in the music department, prefer to be called by their professional titles.

“There are reasons and philosophies behind varying preferences,” said Beverly Lapp, chair of the music department.

Students of Christie Bonfiglio, chair of the education department, refer to her by first name but when she started teaching seven years ago, that was not the case. “I understand the culture of Goshen College … however, when you’re a 5’2’’ female whose name is Christie, it (doesn’t) hold the same weight as ‘doctor,’” said Bonfiglio.

It’s no secret that email correspondence allows many to feel more at ease in conversation, but does this create a lack of professionalism among students and professors? 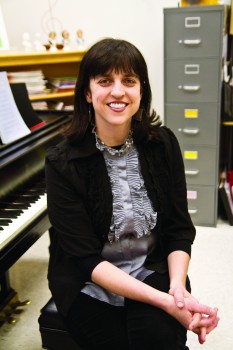 Beverly Lapp, chair of the music department, shares her views about the informality of student-professor relations on campus.

Similarly, Julie Reese, chair of the psychology department, doesn’t mind when students call her by her first name. “Titles are not what gain us respect and my preference is to function that way,” said Reese.

Yet despite her preference on the issue, Reese expressed that she feels discomfort in email communication. The tone of the conversation often sounds as though the student feels he or she is entitled rather than presenting their question with respect. Reese believes that youth culture has moved to a place where colloquial communication, though it may not be intentional, leaks into a professional setting and some may forget how to communicate in a formal context.

Lapp doesn’t mind how students address her but added, “I do cringe now and then when I get an email that starts ‘Hey Bev,’ for example. That type of thing crosses a little bit of an informality line.”

“Professionally, we would want students to be very thoughtful about how they address people they are working with,” said Lapp. “I think that would be important to every discipline.”

Hannah Eberly, a senior nursing major, said, “Dr. Wood would sign her emails with a professional title because she had a Ph.D. but would let us call her by her first name in class; I wanted clarity.”

Seth Krabill, a sophomore education major, expressed a similar concern. “I’ve had several professors who address themselves by their titles but only through email and on paper,” said Krabill.

Lassane Ouedraogo, a junior, said, “What is most difficult is knowing what to call them when writing an email.”

No matter what title professors prefer, it is apparent that students would appreciate clarity.

Goshen began using a first-name basis many years ago in order to build community and interpersonal relationships.

“(This) allows for a closer relationship in my opinion,” said Krabill, a sophomore education major. “Calling a person by name helps make them a person rather than a position or qualification, allowing them to be more approachable.”

As culture and tradition evolve, it may be time to begin a new conversation on the issue.

“I think we can have a very warm and inviting environment with professional titles as well,” said Lapp. “In a setting where teaching and learning is happening, relational aspects are really important and we trust that can be positive whatever preferences are in place.”

Bonfiglio suggests that a significant amount of training may be needed to help students differentiate between times when it is appropriate to use first names and when it is not.

Ryan Sensenig, professor of biology, agrees that a discussion with students and faculty would be beneficial. “Particularly to respect the varied approaches and to help us model to students how the context really matters,” said Sensenig.“That is a lifelong skill to have.”