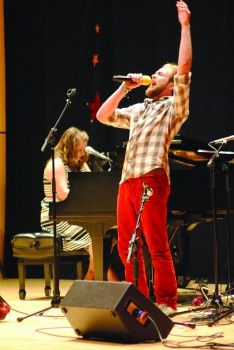 They may be on opposite ends of their collegiate careers, but Martin Flowers, a first-year, and Emily Trapp, a senior, put their age difference aside and their music skills together to place second at the spring 2013 Kick-Off.

This was Trapp’s sixth Kick-Off appearance and Flowers’ second after he won the event last semester.

It was Flowers’ fall Kick-Off solo debut that first sparked the idea for Trapp. “I heard him sing at Kick-Off in the fall and he did an amazing job,” said Trapp, a music major from Oregon. “I was very inspired by his performance. I was like, ‘yep, I’m going to sing with him before the end of the year.’”

Flowers, too, was enthusiastic about the opportunity to work with a fellow musician.

“Fall Kick-Off was a lot of fun, but working with people on stage, having that collaboration, is really powerful for everyone in the room,” said Flowers, a music and theater major from Nappanee, Ind.

The duo began rehearsing only a few days before auditions, cycling through an array of material before arranging their final selection.

Trapp’s experience as a senior helped guide the process. After all, Flowers said, “she’d been in so many Kick-Offs.”

The pair auditioned with nine minutes of material and had to reduce their selection to two songs for the performance: “Feeling Good,” a jazz standard written by Anthony Newley and Leslie Bricusse; and “Somebody I Used to Know” by Gotye. In addition to singing with Flowers, Trapp accompanied on piano.

“Martin can attest to this; I was really nervous,” Trapp said, adding that it was a “little scary” changing their repertoire last minute.

Flowers, too, felt the nerves, especially following his fall success.

“I can feel the pressure, definitely, but we talked about (not performing to win) a lot” Flowers said. “In the end, we just really wanted to perform, to move people through music. That’s the ultimate goal.”

“When you stop thinking about winning, you really win,” said Trapp. “I was really, really surprised when we placed, not because we weren’t good enough but because I had forgotten that it was a competition.”

And for the first year, the experience was also a lesson in confidence.

“I’m so incredibly intimidated by upperclassmen and have a hard time reaching out to them,” Flowers said. “I think the thing for me that I can really take away from it is just not to be afraid to be direct, because just this one simple gesture, ‘hey, do you want to jam sometime?,’ ended up with us having a lot of fun on stage.”

With Trapp graduating in April, spring Kick-Off may have been the duo’s one and only show. However, both Trapp and Flowers agreed that they hope to continue to seek out similar musical endeavors, whether here at GC, in grad school or beyond.