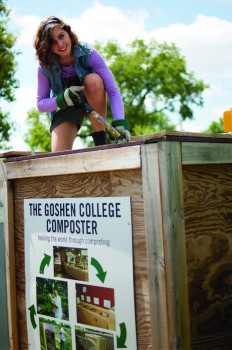 Natasha Weisenbeck began her trek to the U.S. Composting Conference in Orlando, Fla., on Monday to speak about Goshen’s current composting system and how it has been developing since 2011.

Weisenbeck, a junior Bible and religion and public relations major, has been a dedicated member of the GC composting team since she was a first year in fall 2010. Since then, she has volunteered once a week, every week, to collect and dump food waste into the campus-wide compost bin, a large wooden box located behind the dining hall dumpsters.

Before heading to Florida, Weisenbeck knew what she wanted to accomplish. “I hoped to learn how others envision and enact more sustainable waste solutions,” said Weisenbeck. “There [were] workshops on New York inner city compost initiatives as well as new compostable plastic and packaging technology that may help us reduce other wastes beside food. The compost and sustainable practice industry in general is growing.”

One of Weisenbeck’s presentation topics was the technological upgrade of the compost bins at GC. Last summer, new pivot screeners were installed on the compost bins. A pivot screen is used after most of the waste has decomposed and cuts down the time of the former screening process, Weisenbeck explained.

Overall, Weisenbeck got much more than what she bargained for at the conference, stating that she learned a lot about compost bins and the growth of the composting industry.

“Composters, I realized, seem to be pretty earthy, laid-back people,” said Weisenbeck. “Maybe it was the informal speaking style of the presenters at the general session or the 15 minute delay of people walking into general session that cued me into this, or just some general technology ineptness paired with sustainability.”

Even though Weisenbeck felt she was the youngest one at the conference, she said everyone was there for one purpose; they were there with the desire for better solutions to waste management.

“Nothing can get done in the composting world without people,” Weisenbeck said. “The support and effort of people is what keeps the dream of sustainability alive.”

Three years ago Goshen College understood that and took a challenge that would help keep the school more green and resourceful. Luckily, with the help of Physical Plant and ecoPAX club, this challenge is still implemented today.

The compost process is a student run organization enacted by ecoPAX members. The Physical Plant helps to provide resources and direction for composting. Lew Naylor, an adjunct chemistry professor, teamed up with Glenn Gilbert to create a simple composting system for Goshen’s dream.

“The compost box already contains a good amount of pre-consumer waste from the rest of the day,” Weisenbeck explained. “The volunteer then adds twice as much mulch to the box as food that was collected that day (pre & post consumer). This process take about 15 minutes”

This process introduces bacteria to the food, keeping it from smelling and becoming just a huge mass. The wood chips provide airflow to the compost box.

Students are what drive the composting process at Goshen, said Glenn Gilbert, director of sustainability at Goshen College. Gilbert said that the students are great because without students putting in their own time, composting probably would not happen. That was one of the topics of Weisenbeck’s presentation at the conference.

The steps that Goshen has taken along with support from the student body show just what a success sustainability can be. Not only is Goshen College taking steps to a better future, but Weisenbeck saw that many other companies and organizations are headed in that direction too.