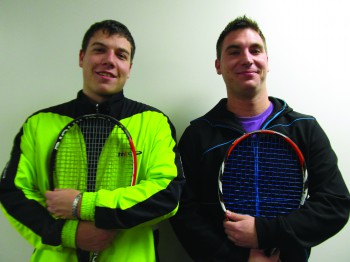 Csaba Attila and Balazs Pirot both hail from Hungary and love to play tennis. Csaba is a senior business major and Balazs is a first-year informatics major.

Q. The Hungarian F1 Grand prix is one of the most famous sport activities in your country. How did you guys end up being tennis players?

Csaba: The Hungarian Grand Prix is one of the biggest sport events during the year and brings a lot of tourists to the country, which is good. However, in Hungary, soccer is the most popular sport by far. That’s why it is not surprising that I started to play soccer at the age of five. But one day my dad took me with him to play tennis, and while playing with my dad, a coach was watching us. He told my dad that he saw big opportunities for me in tennis and initiated the idea of putting me in a tennis academy.

Balazs: I was with my mom when I got the inspiration to play tennis. I asked some fellows if  I could play tennis with them, and liked it so much that after two months I got a tennis racquet for a Christmas gift. I was the first person to play tennis in my family.

Q. What inspired you to come to U.S. and study at GC?

Csaba: I got a tennis scholarship from Goshen in 2010. I had been in the States before that. The first time I came to America, I fell in love with this country. That’s why when I got the scholarship I was really happy. I was completely ready for new challenges and adventures in my life and I also wanted to go to a school that has a good business program. And I found it to be Goshen College to fulfill my dreams.

Balazs: I was always interested in studying in a foreign country, and after I realized that I still wanted to play tennis and study, it was obvious that I needed to leave my home. The U.S. was a good option. Because I knew they were giving scholarships, I decided to use my tennis skills and keep playing and studying at the same time. I sent my application to many coaches in the NCAA and NAIA as well. I came to Goshen because of Coach Stan, who always replied to my emails quickly and showed interest in me. He even called me several times. I looked up Goshen College and I liked that it is small and friendly, so I wanted to be part of this wonderful community.

Q. What were your favorite activities during break in Hungary?

Csaba: Well, it is always great to go home. To see my family and chill with friends. Besides that, I was participating in soccer tournaments sometimes.

Balazs: Just to be with my family and hang out with my old friends. It was really nice to actually see them after four months. That three weeks was almost enough to meet everyone. And of course I had a couple of practices with my old coach.

Q. What do you miss the most about Hungary?

Csaba: The first thing that came to my mind was my friends. I would be really happy if people from Goshen could get to know them; they are really cool guys. Then food for sure. And I also kind of miss the “big city life,” but it might be better that Goshen is smaller because at least I can focus on my studies, which is very important.

Balazs: Definitely the food. Our culture and taste is a lot different than what the U.S. has. The most common food in Hungary is goulash soup.

Q. What are the most recognizable things in Hungarian culture?

Csaba: Well, one thing you should know about Hungarian food is that it’s not really healthy but very delicious. There are a very few Hungarian restaurants in America that serve authentic Hungarian food.

In Hungary, Santa Claus comes on Dec. 6 ( the same day as my birthday), and the other [holiday] is when Jesus brings the presents on Dec. 24. Several holidays also honor rebellions that happened in Hungary. The first one happened in 1956 when Hungarian people rebelled against the Soviets, the very first [rebellion] after the second world war. The other one happened in 1848 when people rebelled against the Habsburg dynasty. At that time there was a monarchy between Austria and Hungary.

Balazs: Our language is unique and is not even similar to any other languages.

– The Hungarian language is known as Magyar. It is the direct descendant of the language spoken by the Huns.

– Some of the great inventions like the Rubik’s cube, ballpoint pen and holography were invented by Hungarians.

– Hungary is one of the oldest countries in Europe, founded in the year 896.