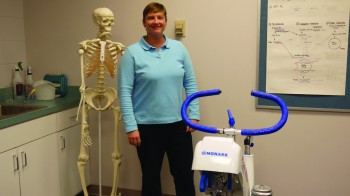 Starting next fall, students can combine knowledge of the body with knowledge of running, weight-lifting and sports.

A new major called “exercise science” will be offered. The major corresponds with the physical education department changing its name to the kinesiology department.

Physical education is a very narrow term to describe a growing field and department, especially with the scholarly research and professional application it encompasses.

So, Jewel Lehman, chair of the newly-founded kinesiology department, decided to use this overarching term to create a more descriptive and inclusive title for what Goshen has to offer.

The new major is designed to help students move on to graduate school and into careers in the fields of personal training, physical therapy, physiology and biomechanics.

Current students are also excited about the new opportunities offered through the major.

Aaron Frost, a sophomore fitness leadership major, hopes more students will be attracted to Goshen because the exercise science major will focus on different skills than the education major.

The downside to the progress within the department is the difficulty students graduating before 2016 will have if majoring in exercise science. Because it will be part of a new curriculum and requirements, older students would also have to follow the new general education, or CORE, requirements too, setting them back significantly and making the major even more work.

Lehman, however, is excited. “It gives me the opportunity to have higher expectations for the students and also makes me have to be at the top of my game,” Lehman said.

Johnson said the professors are a big reason he enjoys the kinesiology department. Lehman demonstrates a tenacity for increasing the growth and excellence of the programs and students, he said.