From the Peace Corps to Ecuador: tales from winter break 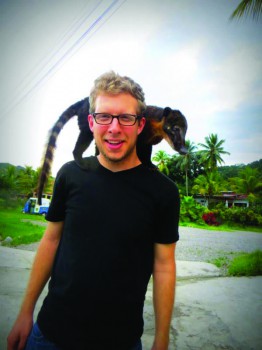 Karina Kreider, a junior, decided to make good use of her time–and hands–over Christmas break.

Inspired by the idea that hand-made crafts and knowledge are a dying art, Kreider and her dad built an entire toboggan by themselves. The sled was constructed from old floorboards, rope and ash wood.

Though Kreider said the structure of the toboggan was fairly simple, the process was more intricate than she had anticipated.

“Between the two of us,” Kreider said, “we probably both spent 15 to 20 hours on the toboggan.”

The largest complication, Kreider said, was figuring out a way to curve the boards that form the front of the sled. After brainstorming, Kreider and her father rigged up a contraption made from buckets that bent the boards for several days.

After the boards were set, Kreider said she cut the boards to a desired size, pieced and clamped them, then nailed them together. When the sled was complete, she added a personal touch to make the surface slick enough to sled on: a bit of beeswax from her family’s own beehive.

Kreider said that more than anything, the project was valuable time spent with her father. It also taught her about tools and the process of construction.

“Now when I see something, I think about how I can replicate it!” Kreider said.

Though the toboggan is finished, Kreider said she has yet to test it.

“But I’m hoping my parents can bring it to Goshen,” Kreider said.

Over break, Andrea Moya returned to a place far away from Goshen, Ind., but a place familiar to her nevertheless: her home in Quito, Ecuador.

Moya, a junior, is Colombian, but has lived in Ecuador since she was 8 years old. Though Moya was able to visit Ecuador this past summer, before that, she hadn’t returned home since she graduated from high school.

Moya described Quito, which is the capital city, as a 3-4 hour drive away from the jungle, beach and mountains. The climate is usually between 55 and 75 degrees, she said.

While Moya was in Ecuador, she said she enjoyed the “3 f’s” : family, friends and food.

“I loved spending time with my family,” Moya said. “We went on a short trip to the jungle, chilled by the river, and ate a lot of fish.”

Moya’s favorite Ecuadorian food is locro de papa, a potato soup that is “thick in consistency and usually served with avocado and fresh cheese,” she said.

“I also went out with my friends to eat, have coffee, and just hang out,” Moya said. “We also went out dancing a couple of times, which was really fun.”

Moya’s family celebrated Christmas on the night of Dec. 24. They celebrated with a fancy meal that included turkey, special rice, potatoes and salad. After dinner, her family made music and danced before opening presents at midnight.

Moya hopes to return to Ecuador this summer.

Hans Weaver did something over break that not many students can claim: he returned to his Study-Service Term location.

Weaver, a junior, returned to Peru to visit his service assignment, Highland Coffee Products. Weaver and Niles Graber-Miller, a junior, worked with the company during SST and have since become salespeople for the company.

Weaver spent 10 days visiting the company and discussing possibilities to export products such as coffee, tea and dried fruit to the United States.

Weaver said he sees his collaboration with the company as a “social justice issue,” because many farmers will grow cocaine and support the drug trade if not encouraged to grow coffee. Weaver said he is encouraged by the company’s potential to offer “good jobs to farmers.”

Weaver clarified that his visit was “not necessarily related to Menno Tea.”

In addition to visiting the coffee company, Weaver also got to visit familiar sights from his summer–including his host family, which he completely surprised by walking into their house.

“Visiting Peru [again] was an interesting and humbling experience,” Weaver said. “It was strange but really great and rewarding as well.

Weaver said he appreciates Peruvian dance, food and tradition. He also grew to like the wild driving and transportation–even when a truck he was riding in once almost drove off a mountainous road, Weaver said.

“It’s really hectic but for some reason I really love that,” Weaver said. “It’s really adventurous.”

During her Christmas break, Bojana Jankova, a senior, spent Christmas at home in Macedonia for the first time since coming to the U.S. five years ago. While in other years the trip home was too expensive for her to make, this year she started a fundraiser in November in the hopes of being able to fund the trip.

“I wrote personal letters to some faculty and staff at GC who have become my friends over the years and I also sent letters to a few people off campus,”Jankova said. “With the help of these wonderful people and lucky circumstances, I was able to spend two weeks in Macedonia and had an unforgettable time.”

One of Jankova’s favorite experiences of the trip was her family’s Christmas Eve dinner, which included the tradition of her mom baking bread with a coin hidden inside it. Each year, shortly after the dinner starts, the bread is cut into small pieces. One piece is dedicated to God and one is dedicated to the household, and then each family member chooses a piece.

“It is said that whoever gets the piece with the coin hidden inside it gets luck all year round,” Jankova said. “I’m happy to report that I was the lucky winner.”

Overall, Jankova greatly appreciated the chance to be at home and spend time with family and friends. Though her brother couldn’t be there in person, he participated in some family activities through Skype.

“I loved spending time with my parents, going to my favorite coffee shop with my friends, visiting relatives… it was all wonderful,” she said.

Andrew Glick, a junior, spent two and a half weeks of his Christmas break in Guinea visiting his sister Allison, who is living there for two years as a chemistry teacher with the Peace Corps. Glick spent much of his time biking and hiking with his sister. They stayed in villages where Allison had connections and explored incredible scenery, including mountains, waterfalls and termite mounds taller than the hikers themselves.

“And of course in between all of this was tea,” Glick said. “Tea in the morning, tea in the afternoon and tea basically whenever people noticed that there were white people who were not currently drinking tea. [The cups were] usually only about the size of a large shot glass, with peanuts and about a fifty-fifty water to sugar ratio. Their tea served as miniature energy boosts for us as we traveled.”

The Islamic culture of Guinea stood out to Glick. The call to prayer rang out five times a day, and each time Muslims stopped whatever they were doing to pray.

“That type of devotion was pretty astounding to me,” Glick said. “I can’t say that it wasn’t frustrating at times as well, such as when we wanted to get into Conakry before dark and had our six-hour taxi ride turned into eight because our taxi driver would pull over and find a mosque or a place to pray. Overall, though, it was really neat.”

In addition to appreciating the chance to see his sister again, Glick enjoyed getting to meet other Peace Corps volunteers and hearing stories from them. He found it refreshing to be living in a different country for a period of time.

“Traveling and being out of my comfort zone has a way of redefining and reminding me of my priorities, and Guinea was no exception,” he said.

Hannah Grieser, a senior, traveled to Uganda over Christmas break to attend the wedding of Peni Acayo and Kyle Laker, both of whom graduated from Goshen College in 2011.

“[Acayo] had invited a group of people to join her in the celebration, and I decided it was an opportunity I didn’t want to pass up,” Grieser said.

Acayo, a native Ugandan, and Laker, who is from Michigan, had a traditional Ugandan wedding ceremony, which is known as an introduction ceremony.

“I had interesting conversations with each of them on the idea of bringing two cultures and two traditions together,” Grieser said.

In the days leading up to the ceremony, Grieser relaxed in the mornings and then prepared for the wedding in the afternoons. Part of the preparation was getting everyone fitted for traditional Ugandan clothing: kanzus for males and gomezis for females.

The wedding ceremony included Laker presenting a dowry to Acayo’s family and them accepting him. After this, Laker proposed to Acayo again and the two put on rings and were considered married.

“There were some speakers, lots of talented dancers who entertained the crowd, lots of food to eat and many pictures being taken,” Grieser said. Grieser stayed at the wedding from 2 to 10 p.m., although some people stayed and danced until 7:30 the next morning.

One of the things Grieser enjoyed most about the trip was the people she got to meet. “Those I met were incredibly kind and genuine,” she said. “I felt as if each smile came from the soul. I’m so blessed that I was able to go, support Peni and Kyle and experience all of this firsthand.”