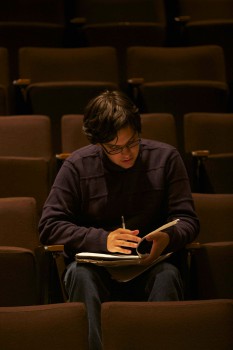 While the Irene-Ryan acting competition often carries the most hype at the annual American College Theater Festival (ACTF), behind the scenes a wide array of other events are taking place. This year, Nate Vader, a senior, is helping draw attention to one of those events by earning the title of “runner-up” in the Institute for Theater Journalism and Advocacy (ITJA) competition.

Vader had always been interested in attending ACTF, so when theater department chair Doug Liechty Caskey informed him about ITJA, he decided that was the excuse he had been waiting for.

As an English writing major and theater minor, critiquing plays seemed like a natural fit.

“I figured, why not? It seemed like a good opportunity,” said Vader. “I didn’t really have super high expectations to win or be a runner-up; I just thought it would be fun.”

According to its website, ITJA invites writers to “explore the many ways that theater journalists are now able to respond to theatrical productions.” There are no prerequisites to join the program besides basic registration. Students participating in the ITJA competition attend and write critiques on three of the shows performed at the festival. Critiques are then shared in a workshop setting and writers receive feedback from both professionals and peers.

The judging process, Vader explained, was based on “looking cumulatively at everything we wrote over the course of the week” while also trying to measure the potential of the writer.

Participating in the competition made for a busy festival for Vader, who said he was often arriving at the event early in the morning, “when the parking lot was empty.”

“I would have to find places to sit down and do a lot of writing, which was sometimes difficult.”

Vader considered his efforts well worth the time, though.

“A critic is in a difficult position because they have to obviously identify what’s worth seeing, what isn’t worth seeing, and why,” said Vader, “which is easy to do maybe in the privacy of your home, but it’s hard to put yourself out there by directly saying ‘this thing you put out there maybe isn’t that good.’”

After all, said Vader, “No one’s out to make a ‘bad play.’ And while “people value your opinion,” he said, “at the same time you can be seen a little as the enemy.”

Because of that, the positive feedback Vader received from the competition was particularly meaningful.

“It’s rare to feel affirmed for being able to do that type of work,” said Vader. “Being the runner-up in this workshop was really wonderful because I felt like it showed me that I’m capable of doing this, and it’s something I could look at in the future.”

Vader added that he hopes other GC students interested in writing and theater will seriously consider the event.