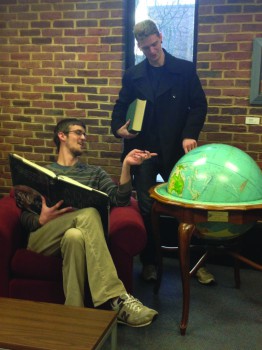 Editors Brian and John plot their course for Funnies domination.

As a senior Bible and Religion major, I have been around the Goshen College block, so to speak. I have taken classes with many professors on campus and tested the waters of various concentrations and areas of study.

One time I even swam in a fountain, but do not tell the authorities about that. This is all to say that I, Brian “Tall, but not quite as tall as ‘Tall John,’ Brian” O’Leary know what I am talking about when it comes to courses at Goshen College. Therefore, given the wealth of knowledge I possess, I believe I am in a prime position to call for a reform of college policy on one particular issue: auditing Study-Service Term.

Now some of you may question the wisdom of such a move. After all, many Goshen College students are forced into taking SST, and why would anyone want to take the course but not receive credit for it? But I say to you: fun, duh. SST is a wonderful experience for many people who would love to relive it without all the hassle of doing actual work.

Going to Nicaragua, Peru, Senegal or even China a second time without the distraction of school would be the best thing since the invention of putting a knife through baked carbohydrates.

Imagine living entirely in another culture with your only responsibility being to occasionally observe class, hang out with friends or avoid breaking rules. Sounds like a sleepover. But get this, it lasts for three months!

Just think of an audited SST course as the same as a slumber party, except the food is a delicacy rather than a three-month-old Cheetoh you found under a couch cushion. After all, everyone misses those carefree days of fun of no responsibilities and eating unidentified foods. ¡Viva la revolución!