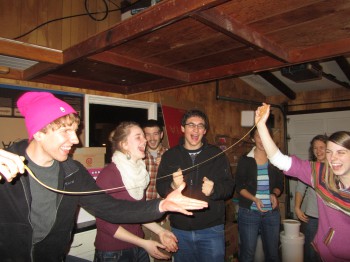 Nothing beats a good old-fashioned taffy-pull, even when global warming gets in the way.

I learned that lesson last weekend when my fellow Vita House-mates and I hosted a taffy-pull party for the whole campus to attend. A taffy-pull, for those who have never been to one, is when you take homemade taffy—sugar, cream, corn syrup and gelatin—slather your hands with butter, and, with a partner, continuously pull the candy back and forth until it’s light and fluffy. Then, you cut the taffy into bite-size pieces and roll it up with wax paper, creating sweet morsels of sugary bliss.

Sounds pretty straightforward, right? We certainly thought so. Mother Nature, however, had other plans that night.

You see, taffy needs to be cold in order to pull it properly. When Vita House signed up to host the event, we assumed it would be cold enough to pull taffy in January. We assumed incorrectly.

As temperatures soared into the 50s on Friday night, we quickly learned that taffy does not, in fact, cooperate with heat. What is does do is cling to your hands in delicious, sticky, messy clumps. Soon multiple guests were stuck with gooey hands and empty bellies.

To combat the heat, we frantically tossed the pre-made taffy into the freezer and told our guests to be patient and make new friends. But as more and more students poured into the crowded living room, eager to try their hand at making candy, I began to worry the taffy wouldn’t freeze in time and our party would be a huge flop.

Fortunately, I was wrong (again). As it turns out, pulling super sticky taffy can actually be quite entertaining with the right attitude. Despite the subpar candy, most of the guests were still willing to get their hands a bit sticky and even did so with a smile.

But the best part of the evening happened when a large group of upperclassmen assembled in our garage for an impromptu “pull-off” near the party’s end. Picture, if you will, a ring of students chanting “Pull! Pull! Pull!” as two competitors face off in a taffy duel of sorts. It was certainly not something we had anticipated happening, but who cares? By the time everyone left for the night, my stomach ached from laughing so hard.

As the new Record editor, I’m still learning what it means to be flexible when things don’t go as planned. Sometimes we don’t get the photos we want or a story falls through at the last second, but that doesn’t mean we can’t make the best with what we’ve got.

The next time I feel overwhelmed by my editorial responsibilities, I’ll try to remember the Goshen students in my garage who found a way to have fun and build community in the midst of a sticky situation.

And in the end, the taffy still tasted good.