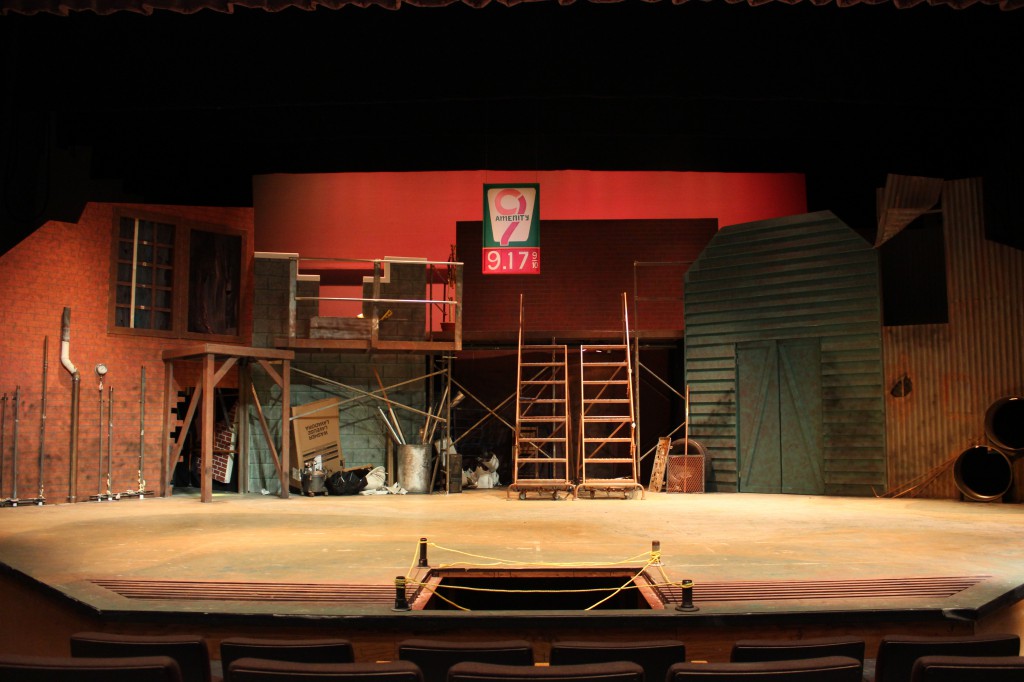 “Doug [Caskey, professor of theater] and I had talked about a set design that could be made out of recycled materials that is environmentally conscious. This was something we discussed beginning my freshman year during May term. It’s really an amalgamation of my two disciplines,” Munley said.

After reading the script, Munley thought Urinetown would be the perfect play for creating a set made of recycled and used materials.

“The major construct of the play is that this place, Urinetown, has been so badly abused that there is a water shortage. There is also an element of social justice, because there is a wealthy elite controlling the resources of everyone. It matched the design idea I had in the back of my head for the time I’ve been at Goshen,” Munley explained.

The play is a call to social and environmental justice, so Munley and Caskey wanted to apply those principles in an a practical way by creating a set that is made of recycled and reusable materials. The paint for the set was donated by community members after Munley sent out a communicator announcement. Many of the decorations are from the underpass and Union construction and from GC Physical Plant waste materials.

“We wanted to curb our consumption. We also wanted to determine what the life of the items would be after the play, which is not something you usually do in theater. There are two moving steel staircases that we bought, but we didn’t buy them until we were sure there would be a purpose for them afterwards. We also bought them used as opposed to new,” Munley said.

The design itself is inspired by landmarks in Goshen and by Yellowstone National Park.

“The colors are inspired by Yellowstone. The oranges are inspired by the bacteria mat on the geysers, and the blues, teals and grays are like the mountainsides and rivers,” said Munley. The pattern on the floor of the set is modeled after the Mammoth Terraces at Yellowstone, which is a type of spring.

A green wall in the set is modeled after a garage on Seymour Street and the brick walls are inspired by Umble Theater and the factories on 9th Street. There is also a sign on the set that resembles the 7-11 gas station sign on Main Street. Munley’s intent on centralizing the set in Goshen is meant to act as a direct call to action for GC students and community members.

“This city needs to be aware of their environmental consumption. Not that we’re wasteful, but we are not intentionally thinking of conservation,” Munley said.

The costumes, designed by Laurel Woodward, a senior, mirror the colors of the set. The cast is divided into two very distinct groups, the executive staff and the poor.

“The poor group’s clothing is mismatched, pieced together, kind of grubby,” Woodward said. “Their costumes are brown and orange; they sort of blend in with the set. The  staff have a cleaner, more formal look, and have turquoise and plum color accents.”

Many of the costumes were made from pieces Goshen College already had, but also from area theaters. There are around 45 costumes total because most characters have two or more costume changes.

Within each of the groups, Woodward used different shades of the orange and turquoise base colors and tried to match costumes to the personalities and histories of the characters. One character is affiliated with both groups, so “the costume needed to be a middle ground for that character, something that would fit relatively well with both groups,” Woodward said.

Woodward was helped by Natasha Weisenbeck, a junior, Elizabeth Derstine and Emma Patty, both first-years, and Sarah Lake-Rayburn, a senior. Woodward also worked closely with Hannah Sauder, a first-year, who is doing hair and makeup for the show.