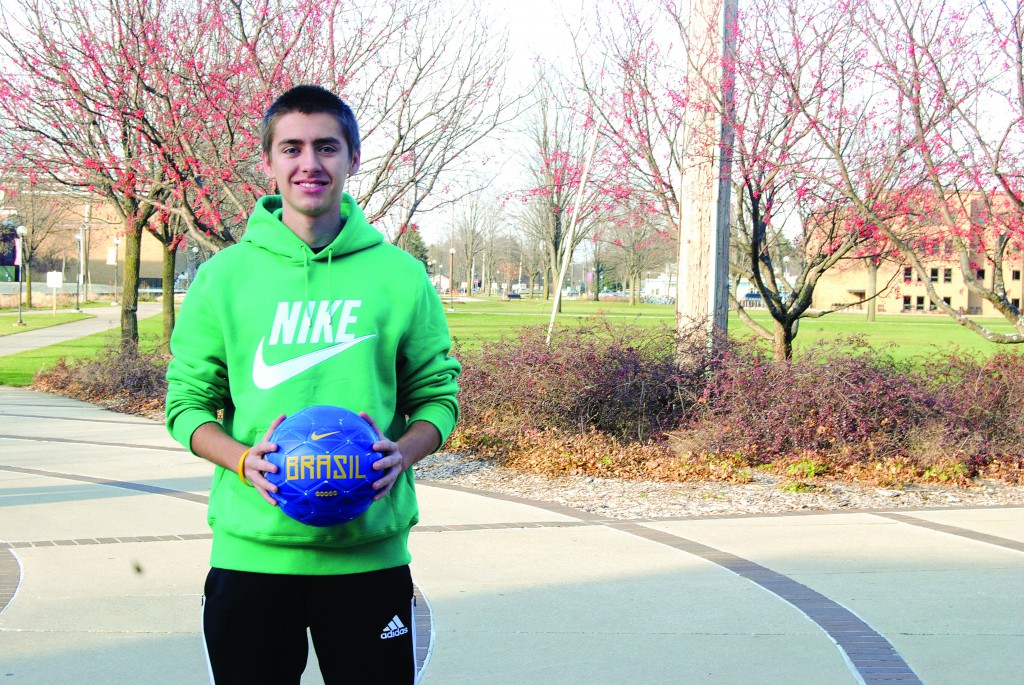 Diego Zago is a freshman from Brazil studying pre-architecture. His passion for soccer opened the doors for him to come to Goshen College.

What is your attachment to soccer?

I would say that soccer is a big and important part of my life. I’ve played soccer since I was a little kid and it always was a passion for me. I think the main reason for this passion is my father. I can remember my mother telling me all my life about my dad’s reaction the day I was born. He bought and dressed me in Sao Paulo Football Club baby clothes – the team he always supported and loved. I think that’s where my passion for soccer started. Then it just grew with me. I have been playing soccer since I was little. I received invitations to play in professional soccer programs where they basically “create” the professional players. But then I would have had to almost quit in some things like school, and my parents – always concerned about my education – preferred to keep me away from [professional soccer] at least until when I would be old enough to decide for myself.

How did soccer lead you to Goshen College?

Playing for Goshen College is already a very important thing in my life. It is a difficult thing to be a professional soccer player in Brazil. For me to be a professional I would need to dedicate my life to it, starting at an early age. The videos of me playing soccer were instrumental for me to get admission [to Goshen]. Coach Tavi trusted in my soccer talents and offered me the opportunity of coming to Goshen and becoming a part of the Maple Leafs. Right now, I’m playing for the Junior Varsity team, but it doesn’t matter to me, because the moment I was accepted in Goshen to study and play soccer I was proud to represent this team.

What are the typical foods in Brazil and how are they prepared?

The Brazilian feijoada is the undisputed national dish in Brazil. It is a combination of bean stew, rice and pork meat. Different spices are used in different parts of Brazil, but they usually include “farofa” (a root from the rainforest tree called Mandioca) mixed with maize flour and oil. Originally feijoada was made using every part of the pig.

The origin of the feijoada runs back to the sixteenth century with the introduction of African slaves in Brazil. Later, the culinary culture of Africa was mixed with the European food traditions. The African root of this food was the basic bean stew, the Portuguese added the linguiça (sausage), and the Indians added the farofa (toasted manioc flour). As a result the feijoada became a “heavy” dish which gave the workers the energy they needed. Today feijoadas are widely famous in Brazil and most restaurants have special days when they serve this nutritious meal. And I must admit that I never miss a chance to get a real traditional dish in Brazil when I’m traveling.

The problem in preparing this food is it is difficult to find the right ingredients outside of Brazil. An ordinary family in Sao Paulo has feijoada at least once a month, as well as for special occasions such as Christmas food recipes, birthday dinners or Easter festival.

Are there languages other than Portuguese in Brazil?

No, the unique language is Portuguese. But you can find different kinds of accents and words in different regions like, north, south, east and west.

What are the traditional holidays in Brazil?

I would say that the most important holiday in Brazil is Christmas, which we call ” Natal.” The new year is also one of the most celebrated holidays in the country. In some cities, like Rio, they make huge events on the beach with more than ten minutes of fireworks in the sky just to celebrate the new year. We call Easter “Páscoa.” It is a tradition to give and receive chocolate eggs and tell the kids that [the Easter Bunny] brings the[m]. Every single kid grows up believing in the Easter bunny, just like Santa Claus.

Brazil is the largest country in South America.

The world’s second longest river, the Amazon, is found in Brazil.

Brazilian currency have both vertical and horizontal photos.

The largest soccer stadium (the“Maracana”) in South America is found in Brazil.