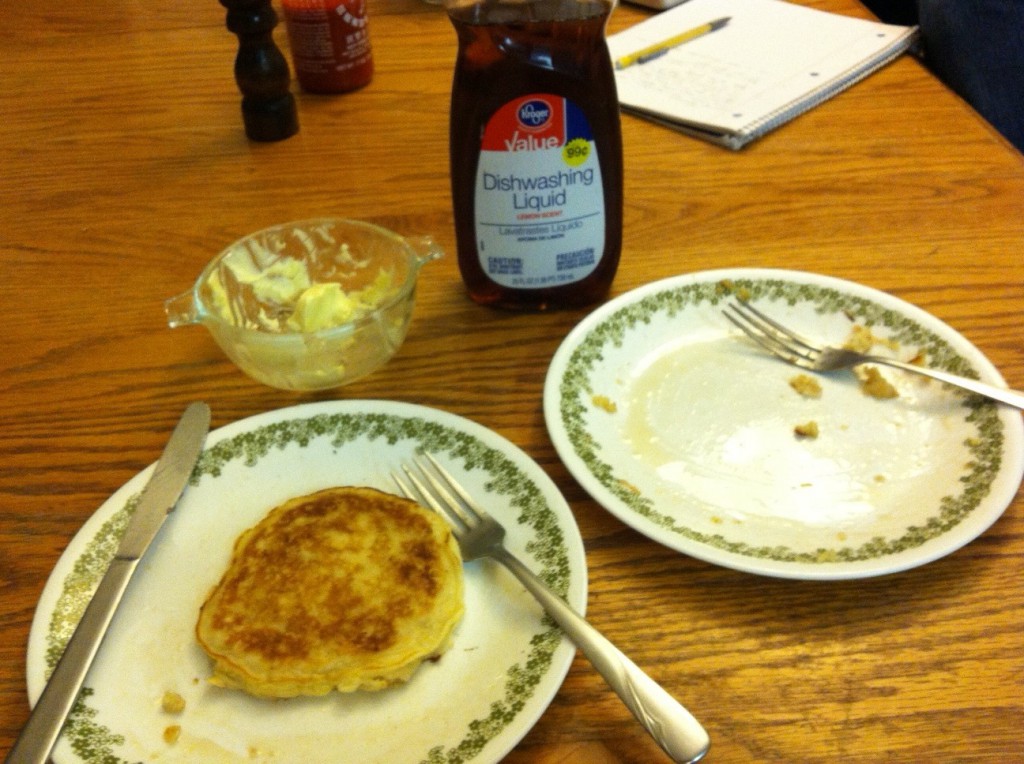 Why I agreed to eat another item cooked by part of the infamous JohnHenry duo, we may never know, but it proved to be a fortuitous endeavor. During an evening of homework at Kenwood, I was offered pancakes by Henry Stewart. In efforts to build up excitement, there was a two-hour window between when pancakes were mentioned and when they were ready to be eaten. I used this time for quiet reflection and to prepare my palate. After a short time my meditative state was interrupted by my grumbling stomach telling me what was up.

After some encouragement and what could be called strong language in regards to my increasing levels of hunger, the pancake making began. Henry set the table as the pancakes were fried in oil and good intentions. The syrup (impressively made by Andrew Glick) was artfully displayed in a dish soap bottle–which I took to be some sort of social commentary on American consumerism.

We may never know what exactly went into the mix, and my judgement was partially clouded by my famished state, but if oatmeal and pancakes had a love child, it would be the culinary treasure I was served. They tasted like distant memories of the fair and did a great job of reinforcing my artery walls. According to Henry, “You can save [the batter] for a week and its still good.” While I find this questionable in terms of health benefits, the taste usurped all.

If you are looking for a culinary treasure and have a couple extra hours on hand, go visit Henry. These pancakes deserve the  A-meh-zing rating of four out of five mehs and might be worth your time.

If you have a dish that you think is “the best ever” and would like to have it professionally reviewed, send me an email at jessicaks@goshen.edu I’ve got a sweet tooth and I’m lactose intolerant but I’m willing to try just about anything, except onions. NEVER ONIONS!