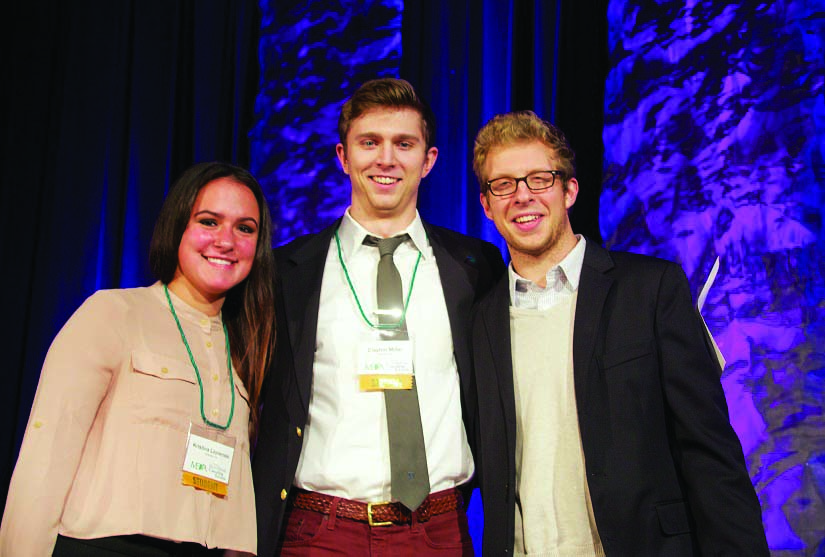 Two weekends ago, eight Goshen College students traveled to Canada for a business convention organized by the Mennonite Economic Development Associates (MEDA). A team of three of these Goshen students—Hans Weaver, Kristina Lopienski and Clayton Miller, all seniors —won a case competition between students from Mennonite colleges and universities in North America.

The challenge of the competition was to create a business plan for Winterfeld Greenbau Construction Co. in Waterloo, Ontario. Winterfeld is a local business that provides construction and renovations towards more sustainable and energy efficient buildings. Seven student groups presented business models for the company in front of a panel of four judges.

“We got the case about a month before the competition, and we spent about three weeks putting our ideas together,” said Weaver, a business major with a minor in global economics.

Lopienski, also a business major and global economics minor, said that those three weeks were full of intense work and research. “This became a higher priority for us than even our school assignments,” she said. Both Lopienski and Weaver described their group work as a very cooperative process. While Weaver focused on Winterfeld’s web presence, Miller used his graphic design skills to create promotional material and Lopienski worked on a financial and business plan.

By Nov. 1, the week of the competition, their hard work began to pay off. Out of the highest possible score of 140 points, the winning group of Goshen students earned 132. The next highest scoring team got 101. “We felt very good about our score,” said Weaver. “This is something we had all been working really hard on.”

While Weaver and Lopienski agreed that the competition was very rewarding, both see this project as having value beyond just the recognition.

“One reason I was so excited about participating with MEDA was because I worked with them while volunteering in Peru,” said Lopienski. Her service assignment also focused on environmental concerns and gave her the oppurtunity to create a business model for ecotourism. “Marketing and sustainability are my biggest interests,” she said.

Weaver hopes that recognizing his work will get people to rethink how they perceive business. “In all honesty, entrepreneurship is a lot of fun,” he said. “I hope people begin to associate business more with creativity.”