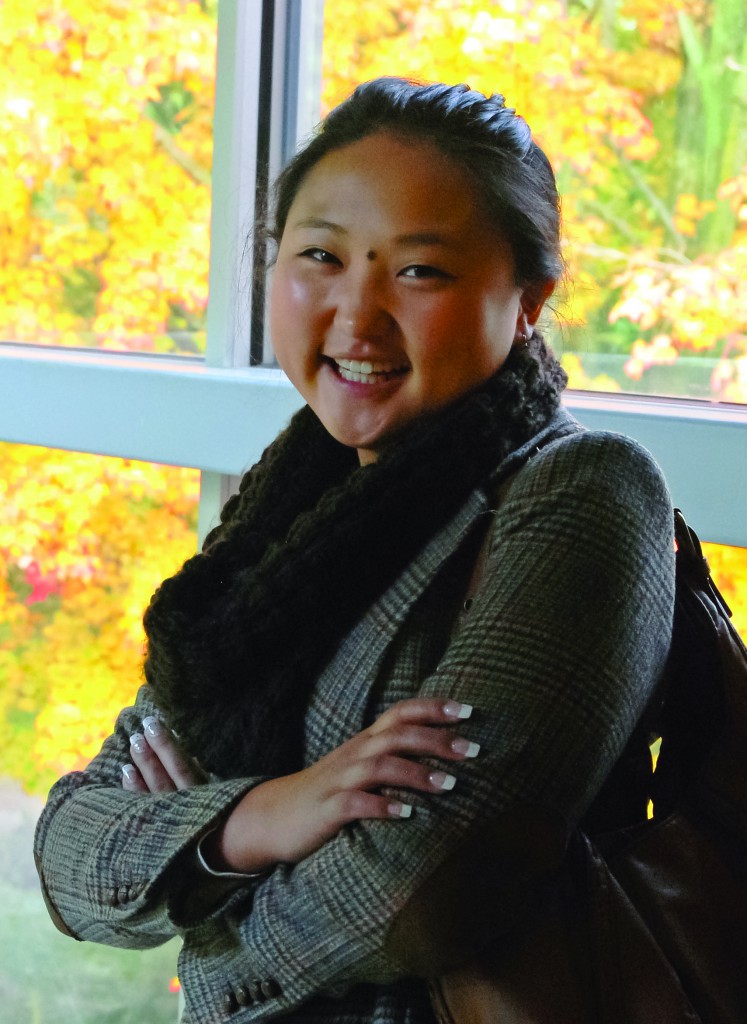 Solongo Gonchigsuren is from the far eastern country of Mongolia. She is a first year student at Goshen College.

-Other languages: Russian and English

Mongolia is a rugged and beautiful land poised between Russia and China. To the north stand sharp mountains while the Gobi Desert stretches to the south. Grasslands supporting nomadic families and their domestic animals lie in the middle.

Over 2,000 years ago, the Mongolian dynasty was so strong and feared that the Chinese had to build the famous Great Wall of China to keep themselves from being invaded. The Great Wall, one of the many tourist destinations China, is 26 feet tall, 20-30 feet thick and stretches along 4,000 miles in the southern border of Mongolia.

What does your name, Solongo, mean in your country?

Solongo means “rainbow”  in Mongolian. It shows the spirit of happiness. Rain and sunlight are the main parts of rainbow, which is considered as a sign of new life. And after every rain there is a clear sky filled with brightness. It is one of the commonly used names in my country.

What is the most important holiday in Mongolia?

The most important holiday in Mongolia is held in July. It’s called Naadam and has been celebrated for hundreds of years. It’s a bit like the State Fair and the Fourth of July rolled in together.

The Naadam holiday event is celebrated with sports activities. These consist of  three main events: archery, wrestling and horse racing. They are considered “manly” sports and are based on traditional warrior skills. Today, Mongolia’s 3 million people still live in ger’s or yurt’s (names of Mongolian traditional houses) as well as in cities. The ancient skills are well preserved.

How did you hear of Goshen College and come here to study?

Last year while I was doing my high school exchange year in the state of Idaho, I went to the Boise National College Fair. I was looking for a college to study at in the U.S. and in that fair I [was introduced to] a list of many colleges in the USA. At that fair Goshen College was not participating, but when I logged onto the website of the Boise National College Fair, I stumbled onto the National Association for College Admission Counseling and was introduced to Goshen College.

Goshen College was on the list of National Association for College Admission Counseling. I did a lot of research on many colleges and GC’s admission requirements suited me best. After my application was accepted by the admission office here at GC  I was able to join Goshen College this fall.

What is the round trip cost to Mongolia from Chicago?

What do winters and summers look like in your country?

The capitol of Mongolia, Ulaanbaatar, is the world’s coldest capital city, with an average temperature of 32 degrees Fahrenheit. The winters are long and the summers short. The majority of the population lives in the capital.

Can you tell me what the traditional foods in your country are and how they are prepared?

Traditional Mongolian food is mostly about meat. We have a traditional meal called “buzz” which is like steamed dumplings.  Other dishes combine the meat with rice or fresh noodles into various stews (“tsuivan,” “budaatai huurga”) or noodle soups (“guriltai shol”). The most surprising cooking method is only used on special occasions. In this case, the meat (often together with vegetables) gets cooked with the help of stones, which have been preheated in a fire. This either happens with chunks of mutton in a sealed milk can (“Khorkhog”), or within the abdominal cavity of a de-boned goat or marmot (“Boodog”).

What do you miss from being far away from home?

I miss using my native language because I am the first and only Mongolian to come to Goshen College. Also, I miss my mother’s delicious cooking.