Spooky campus folklore: The prank that said “boo” with a “moo” 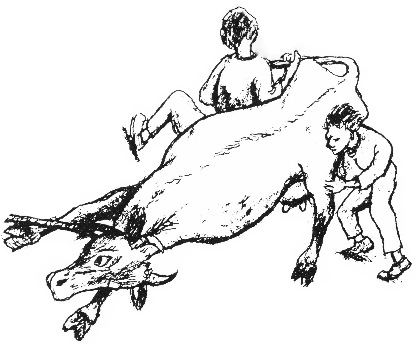 As told by Al Lohr, graduating class of 1942. Story and picture from “The Cow in the Science Hall,” 1994, by Kyle Schlabach.

One dark night—it may have been Halloween—a bunch of us decided to place a cow in Kulp Hall. Now, in order to do this, we needed the help of one of the girls in Kulp Hall to unlock the main door on the street or College Avenue entrance. There were quite a few steps into the dorm, so the task of getting said cow into the hall was not an easy one.

In  those days, there were farms a short distance beyond the college, so it was relatively easy to acquire a cow.

We led the cow to the steps and tied a rope around its mouth to keep her from bellowing and a bag over her head so she would go where we wanted her to. Only she didn’t want to go up those steps. We all grabbed legs, tail, neck, and also took hands under her belly and literally carried her into the dorm, where we removed all the fetters, slapped her on the rump, and she was on her way down the hall.

The floors were waxed and she was frightened, so she proceeded to run and fall and fall and run. Soon girls’ rooms opened and heads popped out and the stairs filled with upper-floor women all-out screaming at each other.

Soon this poor, frightened animal was leaving evidence of her fright on the floor, walls and ceiling.

This went on for quite a while, until one of the ladies, who happened to be raised on a farm, opened the College Avenue door. After making many trips up and down the hall, our cow was glad to see an open door and zoomed out into the night and home to her farm.

We, the fellows involved, started the rumor that some Goshen town boys were seen in the area. Also, the next day, a bunch of us volunteered to help clean up Kulp Hall.

I don’t think the officials of Goshen College ever knew who was involved in the dastardly deed.