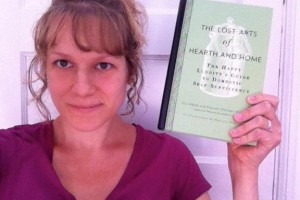 Rosanna Nafziger Henderson graduated from Goshen College in 2006 with majors in English and math, not the most obvious path to becoming an authority on food.

Henderson herself admits that she could not have predicted that six years after leaving Goshen she would be a cookbook author and food blogger.

On Oct. 2, she celebrated the official publication day of her second book, “The Lost Arts of Hearth & Home,” which Publishers Weekly called “an utterly charming collection of recipes and how-tos for the 21st-century hipster-homemaker.”

Henderson described the slow process of writing at her home in San Francisco, where she composes and edits standing up, her manuscript on a butcher block counter in the living room that serves as her desk.

To find out how Henderson got into cooking, we go back to her home state of West Virginia. She recounted that cooking was a big part of her childhood.

“We did a lot of gardening and canning and making food from scratch,” she said. “I learned to love cooking from a pretty young age and I never thought I would wind up writing about it professionally, but it worked out that way pretty well.”

Her interest in back-to-the-basics cooking continued when she came to Goshen to attend college. Henderson frequented the Goshen Farmers Market so often that many of the venders recognized her. These relationships were one of her favorite aspects of her time living in Goshen.

Henderson made other connections outside of the food industry as well. During her time in Goshen, she joined New World Arts, where she was able to interact with artists from the community. And she named the accessibility of her professors as the greatest asset of her education.

“Being able to work really closely,” she said, “was instrumental in refining me as a writer.”

After graduation, Henderson moved out West, where she gained more experience with food. For a time she lived in Seattle, working in various restaurants. From there she moved to San Francisco, working in gourmet grocery stores.

Henderson was then able to meld these experiences and her love of cooking with the skills she had honed in college. The result was her blog, paprikahead.com.

“I feel like, looking back on it, there was a lot of serendipity,” she said. “I was amazingly lucky.”

She explained that she was able to publish her first book, “The Lost Art of Real Cooking,” after the publisher she had an internship with, referred her to a colleague. It also helped that her blog acted as a portfolio of her work. Henderson advises aspiring writers to make connections with people in the professional realm; she made many of her contacts attending workshops.

“It was really a chain reaction,” she said. “You never know when the person you are talking to may know the perfect situation or the perfect person for you to meet.”

Similar to her first book, “The Lost Arts of Hearth & Home” is filled with old ideas brought to life. Not only does it explore classic recipes, but it also gives readers other tips on anything from making soap to making your own wedding rings. Traditional cooking is a favorite of Henderson’s; she tries to adapt older recipes to modern times.

“A lot of old cookbooks are brief notations, so there is a lot of room for error,” said Henderson. “The writers assumed you knew what they meant and you were already a cook.”

Although she is not working on another book yet, Henderson is still enthusiastic about D.I.Y. housekeeping and, of course, cooking, and she has no plans to stop writing anytime soon. Both of her books are available on Amazon.com.

In a blog post that announced the release of the cookbook, she described one of the advantages of writing “straightforward instructional nonfiction.” Unlike fiction, she said, “for the most part I don’t even have to second-guess the plot! I already know how the chutney is going to end.”