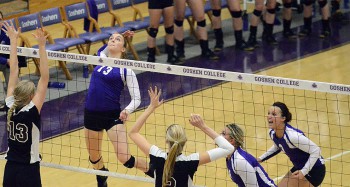 The Goshen College Women’s Volleyball team fought hard, but ultimately came up short against non-conference opponent Aquinas College, as the Maple Leafs fell to the Saints in four sets, 25-23, 25-19, 15-25, 25-21.

The top hitters for the Maple Leafs were senior Hannah Grieser with 13 kills, sophomore Jamie Stack with 10, and sophomore Melanie Meyer with 9. Leading in assists were junior Stacy Wyse and leading in digs was sophomore Missy Mackowiak with 38 digs. The total number of digs on the night was 231, with 124 coming from the Maple Leafs.

The Maple Leafs are back in action Saturday, November 3rd, as they take on Indiana University South Bend.