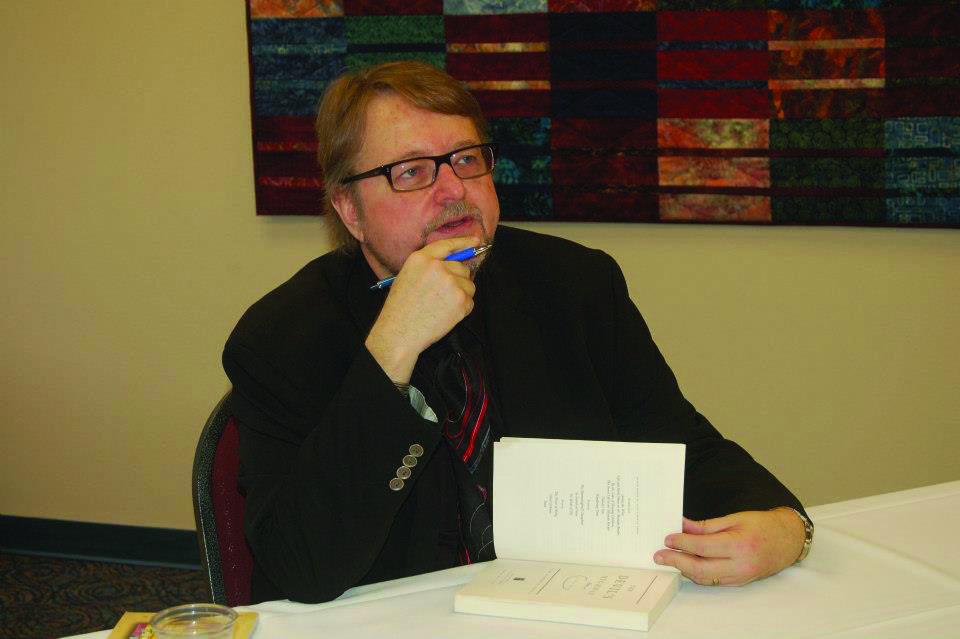 Yesterday, The Record spoke with Luis Urrea, Mexican-American author and S.A. Yoder Lecturer about his work and the convocation he gave on Monday.

Q: Why do you choose what you write about?
A: I try to write about the human spirit; that’s what I’m interested in. The particulars of the book or the subject matter may change, but I’m always interested in our relationships to each other and to God. That’s what every book I write is about.

Q: When did you start writing?
A: Oh man, you know, I probably started goofing around with it when I was 13 or 14. I then really decided I wanted to write in high school. I don’t know what the kick-off date is, but  it’s pretty safe to say somewhere at the beginning of high school it really kicked in hard.

Q: Was there a specific teacher or someone who pushed you toward that?
A: Yeah, there was one especially, and interestingly enough, it was my high school drama teacher. She was really special, you know, she was the first grown-up that took me seriously as somebody who might be an artist of some kind; and it made me crazy. I couldn’t believe an adult thought that I actually had something of value to offer to the art world or to the literary world. Even though the class was about acting, she also inspired all that stuff. She was very smart and liked my writing. I think that she was, as far as teachers go, the one that lit the fuse.

Q: How often do you write? Do you write every day?
A: No, it depends. If I’m in a project or working on a book, I’ll write and write and write; I’ll write everyday until I’m done. But sometimes it takes a while for the story to come; it’s kind of seasonal for me. But once I’m locked in, I turn into a crazy writing machine.

Q: How did you first get your foot in the door for publishing your writing?
A: It first happened through tiny lit journals, like the college lit journal. My first real publication was published by a famous writer who came to my college when I was a senior. She took one of my stories for an anthology. My first book was about Baptist missionaries feeding the poor in Mexico. Nobody wanted to publish it; it took 10 years to get a publisher to finally buy it. It was a long haul.

Q: In the Bill Moyers interview, you talked a little about Chicano literature. How has Chicano literature affected your work?
A: It was the community I grew up in. A lot of those folks were role models, or even friends; and I’m in a funny position now because I’m grown up. So, I’m kind of one of the grandfathers all of a sudden. I didn’t expect that to happen. So now I find myself cheering on and trying to help younger ones who are behind me and that’s a really wonderful thing. So it’s affected it on both ends.

Q: How has writing shaped your identity? How has your identity influenced your writing?
A: I’ve always been a writer; that’s me. There’s no identity question whatsoever. I am who I am, and part of that is being a writer. In fact, it may be more of who I am than being Latino or anything else. The process of writing, the process of doing the diligence of writing, informs my thinking and it informs my spirituality. It is my discipline through life; they are intertwined and I can’t separate them.

Q: Is there a specific message you are trying to communicate through you writing? In the convocation, you said that the border patrol told you they wanted you to tell the truth about them, so is telling the truth that message?
A: You know, the Chinese have a saying and the saying is, “The bird sings because it has a song, not because it has a message.” So, I’m not giving America homework and I’m not cooking them broccoli either; sometimes it’s just like having a milkshake, a present, because you like telling a story. That being said, yeah, I tell the truth. That’s the main point; I don’t lie. I do my best to get to the bottom of the story and tell it as honestly as I know; and I think that, as I said in the convocation, we’re all together in this boat. There is no them, there is only us–that’s my message.

Q: How important is sharing your work with others to you?
A: I think it’s really cool; in some ways I think it’s part of the calling. It’s not a career for me, it’s more of a deep calling that hit me at a very profound level. Representing others as well as myself has been a great gift because it’s important to share those stories. I don’t know how people who only write about themselves all the time can do it without turning into monsters. It’s very important. It’s my art, and part of the joy of the process of that art is finding a way to talk to others and involve them and illuminate things for them. I always to try to give that gift.

Q: Do you have anything else you want to add?
A: I just want to thank Goshen, I really loved being here. I love the school and I love the town. I really enjoyed hanging out with your faculty and talking with them.