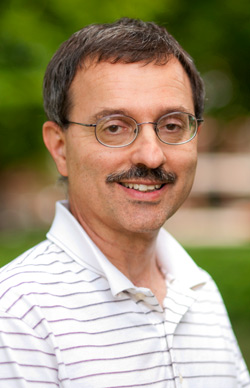 This Tuesday, Oct. 9, will mark one year since the death of James S. Miller, professor of biology.

On the morning of Oct. 9, 2011, an intruder attacked James and his wife, Linda, in their home. James died at the scene and Linda was hospitalized with injuries.

The death and life of James will be honored at a ceremony on Oct. 9 at 4:30 p.m. The ceremony will be held at the prayer labyrinth, where the classes of 2012 and 1962 have donated a bench and landscaping in remembrance of Jim. Former President Victor Stoltzfus and several students will speak. All students, faculty and staff are invited.

Linda attributes the passing of a “very difficult year” to a supportive community and church. She believes her family’s lives are “different because people have prayed for us.”

Still, a year later, neither motive or suspect behind the invasion has been uncovered to the public.

Linda confirms that the investigation is still “active.” Though police worked on the case part-time for several months last year, it has returned to a full-time investigation, Linda said.

The Goshen Police Department continue to show Linda line-ups of potential suspects, she said. Though Linda said she has not yet recognized a suspect, the process has “eliminated lots and lots of people.”

The police are still receiving tips on the case and working to investigate each one, according to Linda. The tips have been “more active in the last two months,” she said.

Linda said the FBI is working with the Goshen Police and has read the case file. Currently, pieces of evidence are being analyzed in an Indianapolis lab, she said. However, the lab requires several stages of processing and can take a long time, Linda said.

Currently, a majority of the investigation involves preparing in the event that an arrest is made, Linda said. “We’re working to get paperwork and everything ready if we happen to go to trial,” she said.

Though Linda said she believes “God has walked through the sadness with us,” she hopes the one-year anniversary can honor James’ life.