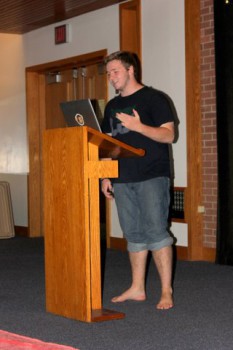 Ammon Allen-Doucot , a first-year, was named the first winner of the “Is the Word” Poetry Slam event that was held Sunday Oct. 14. Allen-Doucot defeated the only other contender Kolton Nay, a sophomore, by the slim margin of 1.6 points.

The judging was done by a random selection of audience members, Alma Miller, Elizabeth Franks-North and Liz Watson. The three were given crayons and scraps of white paper on which to write their score, a number from one to ten. The score is given as both a critique of the poems content and the poets’ performance.