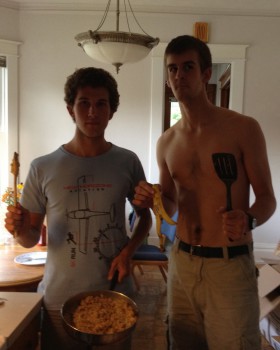 The John-Henry Banana Magic is a dish full of mild delight. The JHBM made its public debut at a family-style potluck and a portion was dished onto everyone’s plate. Skepticism (mostly from myself) was heard round the table when it was first presented with its signature piece of white bread artfully adorning the top. The white bread set the tone quite literally as the dish relied on a monochromatic blend of ingredients (and flavors). Nestled beneath the bread garnish was a blend of fried bananas, rice, crunchy peanut butter (for the texture of course), and uncooked carrots. John Miller and Henry Stewart, the creators, suggested that people give it a little kick and add a dash or two of Rooster sauce.

The first few bites tasted of skepticism but went down surprisingly well. The bananas acted as hidden gems and were kept from overpowering the dish with the aid of the white bread garnish. The rooster sauce gave the dish the flavor it needed and a little dash of color.

You may question the JHBM’s nutritional value, with its strong representation of starches and carbs, but fear not. This dish has healing powers (and don’t forget the uncooked carrots!). According to Miller, co-creator of the dish, “Banana Magic cures illnesses–scabies, rabies, and the heebie jeebies.” Stewart, the other co-creator, after eating his portion simply said, “It’s wild.”

The JHBM is just one of the duo’s dishes. Miller and Stewart can often be found domesticating in the kitchen of Kenwood, which inherently sucks. They have been known to experiment with grits and to stuff tortillas with all kinds of things. For now, this dish was a solid ehh out of five meh’s.