The Goshen College theater department will perform the play “Mr. Maurizio,” written by Mic Weinblatt, the winning play in the 2012 Goshen College Peace Play Contest. The play will run throughout Homecoming weekend with performances on Oct. 5 at 8 p.m., Oct. 6 at 4 p.m. and Oct. 7 at 2 p.m. Tickets are available at the door for $3. 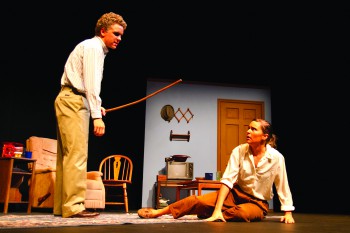 Caskey explained that the theme of peace might not be immediately obvious to observers, as “some of the audience may go away thinking ‘now why was that a peace play?’” Caskey also explained the play deals with a different kind of peace than viewers may expect. “It deals with peace on a more interpersonal level. There’s a relationship between these two immigrants from two different generations and different parts of the world; it’s of cultures meeting each other and trying to figure each other out.”

The Goshen College Peace Play Contest was established by a donation to the theater department in 1982 and takes place every 2 years. Theater professor Doug Liechty Caskey, also a producer of the play, explains that the donation was specifically earmarked to create the contest.

“It’s not necessarily an idea that came from Goshen College; it came to Goshen from this donor, and got [the contest] rolling,” said Caskey. The submissions for the contest come from all over the country and from many different playwrights, who find out about the contest from listings in national play writing contest databases.“Very few people who submit plays have anything to do with Goshen College,” said Caskey. The play contest explains that the theme is peace, but broadly defined, giving contestants more creative freedom.

The plays are collected for two years and at the end of that period plays are narrowed down to create a short list from which the winner is decided. Caskey explained that the selection process doesn’t necessarily favor any particular playwright but is instead based on the play itself. “We do all blind review,” said Caskey, which involves blacking out the authors name on the play script. “As we are reading these [plays] as a committee we have no idea who wrote them; we don’t know if it’s a high school student or a professional playwright.”

The winner of the contest receives a $500 dollar award and gets a trip to Goshen to watch their play performed. Some years the play has a second place winner and honorable mentions. For the 2012 contest second place went to playwright Mary Steelsmith for her play “Seldom is Heard” and there was an honorable mention for Goshen College alum Peter Eash-Scott for his play “Stay Tuned.”

After the play, Winblatt, the playwright, will be available for a discussion session with the audience. He will also be visiting Friday’s Intro to Theater noon class and the 3 p.m. Humanities class. Students and faculty are both invited to attend these events.