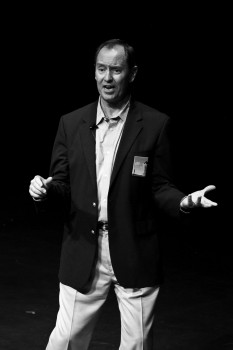 Carl McIntyre spoke to students and faculty at an Umble Master Class lecture on September 11.

McIntyre, an actor and former salesman, suffered from a severe stroke 7 years ago. The stroke left him with aphasia, a communication disorder that impairs speaking, writing and reading. To chronicle his story, McIntyre produced a film titled “Hope is a Four Letter Word.” McIntyre screened his film during the Master Class and spoke on his journey with aphasia.

McIntyre, who speaks slowly but passionately, inspired the crowd, saying, “Every day is hard. But every day is good. Never quit. Without hope, no life.”