Apple at the core of first-year program 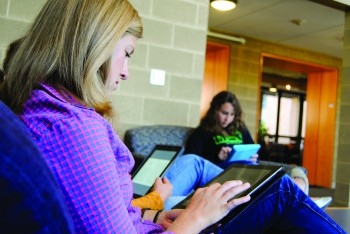 Goshen College’s gift to incoming students this year is quite different from last year’s ceramic mugs. The first weeks of the new iCore technology initiative are under way, and 168 of Apple’s newest tablets are in the hands of the first-year class.

The college issued an iPad to every first-year student as a means of using “cutting-edge mobile technology for educational purposes,” according to a college press release. Goshen’s goal was to “prepare students for life and work in a rapidly evolving landscape” where “tablets and smart phones are replacing personal computers and laptops as primary computing devices.”

The college’s embrace of this frontier in technology has caused excitement on campus for some students and faculty. Michael Sherer, director of information technology, foresees innovation in the classroom.

“This should be the fun part as we explore new opportunities,” said Sherer,  “and students and profs surprise us with the things that they discover and do.”

He acknowledged that there are some “architectural limitations with the iPad” as well as some support issues, but said the IT group has “been working through them along with all the other general support issues associated with the start of school.”

Some of these limitations are affecting students who had hoped the iPad could take the place of a personal computer. Two first-year students, Elizabeth Derstine and Christina Hofer, agreed that iPads cannot be used as a student’s “sole electronic.”

“I just don’t think they’re there yet,” said Hofer, referring to a central role for tablets in education. “It’s been fun, though transferring documents and finding files has been super frustrating.”

Even with early disappointments, she is still looking toward the future. “We’re the guinea pigs, so it’s hard for us,” said Hofer. “They should keep working to add it in to other classes.”

Some students are already working the iPads into their classroom experience. Ben Ganger, a first-year student, enjoys using the iPad  as a calendar and checklist all pulled into one. In addition, he takes his chemistry class’s notes on his iPad, using its mobility and digital advantages.

Jody Saylor, associate professor of biology, co-teaches a first-year course entitled Identity, Culture and Community, as part of the Goshen iCore program. This iCore is the new general education track for students and includes the technology initiative. Her involvement in this class has given her a close-up view of the iPad introduction.

She notes the iPad’s mobility and access as being a big plus for students, with a drawback being they are “not better suited for creating presentations.” She also envisions creative uses for their involvement in the sciences, including as a field notebook.

Sherer has already heard  of creative ways the iPads are being used: a student using the Skype application on her iPad to talk to her parents in India; Paul Keim, professor of Bible and religion, using the virtual keyboard to type in Arabic; Seth Conley, professor of communication, using the iPad to display video concepts much earlier than he otherwise could have; and Ryan Sensenig, associate professor of biology and department chair, working with Sherer on a mobile geographic information systems application.

Goshen College has made this possible by bolstering the network and quickly and efficiently registering all freshmen. “We were able to double the wireless network speed on Wednesday by making some configuration adjustments,” said Sherer, noting that the speed should now be about seven megabytes per second. In addition, “All first-year students have properly configured iPads,” he said, and are successfully enrolled in the mobile device management system, “AirWatch.”

The initiative remains in its early stages of development. As Sherer stated: “We have put GC students and faculty in the position of shaping how iPads will be used in higher education. That’s alternately frustrating and exhilarating.”