A new country, a new language for fall SSTs 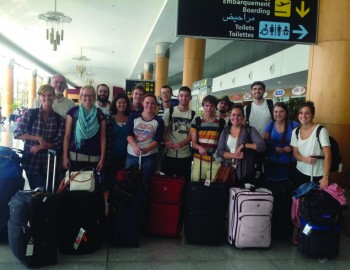 This fall, two Study-Service Term units are pioneering changes for the SST program. Both the Peru and Morocco units, which departed September 5, hold significant new components.

Though Goshen College has traveled to Morocco twice with the “Spain and Morocco” May Term, there has never been a full SST there, according to Tom Meyers, director of international education.

Morocco SST students had originally signed up to travel to Egypt, where a unit ran in 2010. Egypt 2010 was “very successful,” Meyers said.

However, two months after Goshen College students returned from Egypt, a revolution made the country unstable. Meyers said he began to look for an alternative Arabic-based country Morocco was then announced as the new location in the winter of 2012.

The study portion of Morocco SST is located in Meknes, a north-central city. Students will study Arabic for the first 6 weeks, then move to the countryside, where they will volunteer in various organizations.

The unit is led by Paul Keim and includes 14 students. Meyers said he will evaluate if Morocco will continue as a SST location after the first group returns.

Though Peru SST runs every semester and summer, the fall 2012 unit includes a new element: the program will serve as a dual-track program for students learning American Sign Language and Spanish.

In the past, ASL majors traveled to Jamaica for SST, which was designed predominately for ASL learners. However, after running for three terms, the numbers of Jamaica SST participants were not high enough to sustain the program, Meyers said. Adding ASL to an already established SST made sense.

“There are over one million deaf people in Peru,” Meyers noted.

The Peru unit is led by Jerrell Richer and contains 18 students, including 12 Spanish learners and 6 ASL learners.