Through the tunnel: Changes carry campus from old to new 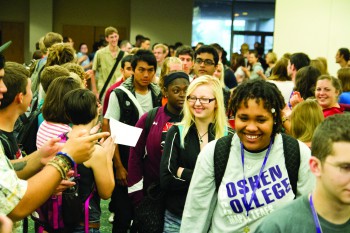 Each year, the beginning chills of fall have beckoned a new first-year class to Goshen’s campus.  However, for the past three years these classes have only gotten smaller.

This year’s class of 2016 is comprised of 166 new students from 22 different states and 14 different countries. While there are only four fewer new faces this year compared to last, Goshen’s enrollment numbers have been shedding students each consecutive year since 2009.

James Townsend, Goshen’s new vice president for enrollment, management, and marketing, said it’s not just about increasing numbers, but attracting the right kind of students. “There’s not a check mark for fun, open-minded, progressive, passionate, and creative students on the SAT,” he said, “but we need to find these people.”

Despite dwindling numbers, Townsend was quick to note that this year’s class represents the very students Goshen wants to attract. “The diversity numbers have been good and we’ve continued to get the traditional demographic of Mennonite students,” he said. “Still, we’ll continue to increase visibility on the web and work with partners in places like India, Puerto Rico, and Brazil.”

Of the 21 new international students, the most popular country of origin is India, followed with an equal tie for second by Kenya, South Korea, Brazil, Canada and Nepal.

In terms of current majors, Mishler showed that incoming first-years also have a few clear favorites. Nursing is the most popular major, followed closely by Biology. Physics and Music tie for third.

Regardless of their majors or places of origin, all of the incoming first-years were given iPads to start off their first semester at Goshen. Townsend said iPads were not about increasing enrollment in the short term, but constructing a base for a more technologically engaged campus in the future. “We’re living in a digital world, so that’s part of it,” he said.

The iPads will be used to build e-Portfolios, download electronic books and utilize online material during classes. The iPads are also a way to access campus resources. A Goshen College “application,” for example, includes soccer chants, a lunch menu, a campus map, go leafs, a calendar and a link to the Good Library.

Still, Townsend said that in attracting more students, Goshen has not forgotten its roots. “There’s so much you can do with the new technology, but it doesn’t replace the basics in outreach and relationships—it adds to it,” he said.