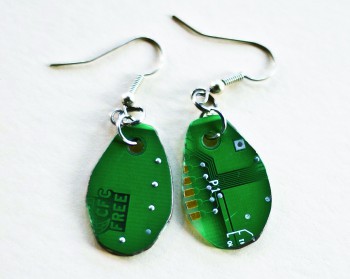 Found objects including unusable computer parts and things people typically throw away are among Ida Short’s mediums for creating art. Short, a sophomore, typically uses these objects to create jewelry. Her favorite piece is a pair of earrings fashioned out of PCB board. Besides creating jewelry, Short enjoys printmaking, specifically with silk screens. She strives to promote recycling through her jewelry and her printmaking, and focuses on social justice and political issues.

Short’s love of art developed her senior year of high school, when she had a “crazy art teacher, who was really enthusiastic, who gave me the art bug.”

In high school, Short created a series of prints that focused on the civil rights movement of the 1960s through portraits of Martin Luther King Jr., President John F. Kennedy and other civil rights leaders. “I created a large work that tried to get the feel of the time, what it would have been like to be there,” said Short.

When creating jewelry, Short typically tries to pick a computer part or other found object based on the aesthetic quality and color. She then creates the piece of jewelry based on what comes out of the shape naturally. For example, the PCB earrings she created had holes at different ends, so she cut a shape around the hole.

Printmaking for Short is usually a result of noticing something in the news: “Something in the news catches my eye, usually a campaign slogan or an article I read. I usually get an image from that and then hold onto that image and then keep collecting those images the more I hear about it,” said Short.

Short’s art was featured in the Juried Student Show last May term and the North and South show last fall.