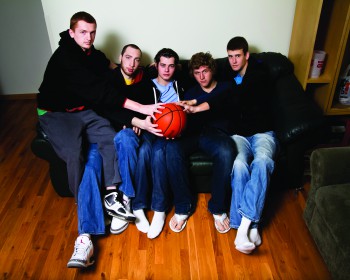 After an 18-13 season, three juniors and two freshmen look for other places to play.

They knocked off five top 25 opponents – four in the top 15 – during the streak, including the defending national champions, Cornerstone University, which was then ranked sixth in the country.

But the Leafs dropped 12 of their next 17, including 10 of 15 in the Mid-Central College Conference, and didn’t defeat another top 15 opponent the rest of the season.

And now five players, including three starters, are looking to play elsewhere.

“For a variety of reasons, we have a handful of players that have decided to pursue opportunities elsewhere,” said Gary Chupp, who is in his fifth year as head coach. The team finished eighth in the 10-team conference.

“I don’t think anyone associated with our program was pleased with how the season finished up this year,” he said. “We all felt like we had a team capable of competing for the top of the MCC and a trip to the national tournament, but several heart-breaking losses prevented that from happening.”

Tim Demant, the Goshen College athletic director, commented on the limited view of some players while expressing support for Coach Chupp.

“From my experiences, players have a certain point of view that is often very limited and biased toward their own desires, things like playing time, rotations etc.,” he said. “Coaches make decisions based on the full season perspective and the opponent they are playing.”

Several of the players expressed their disagreements with the coaching staff and with what they perceived as a lack of development throughout the season.

“We had the best team in the nation … but our practices were not intense,” Hall said. “We never worked on individual skills, and we basically only worked on shooting.”

Chandler said that the job of developing skills individually was, in his view, often left to players.

“In the beginning of the year, just coming to watch the game, you could tell we were a lot more talented than the teams we were playing and that got us by,” he continued. “But when teams continue to keep working and make adjustments, they’re going to be the better team in the second part of the season because they’ve gotten a lot better. We never got better. We were just the same team the whole year.”

Small said, “Other teams adapted and we didn’t.”

Coach Chupp believed he was preparing his team to the fullest each day.

“I felt like our practices were intense,” said Chupp. “One of the things that I would say is, offensively we probably were not quick enough to adjust because our [post players] couldn’t stay on the floor. When we got into foul trouble that should’ve changed our approach.”

The players also said they are departing because they took issue with the team’s method of rotational substitution.  The players recognize that different coaching staffs have different philosophies on how many players are rotating in and out of the game, but they were troubled by the variety of combinations on the floor.

“That was our huge issue,” Chandler said. “[The coaching staff] kept telling us how deep we were and, yeah, we probably had guys that can play; but even teams that have 10 or 11 guys that can really play…you want to get a rotation down.”

Pratt said, “People just couldn’t get into rhythms on the floor.”

Small, who generally came off the bench, added, “We never had a rotation. It was whoever [the coaching staff] felt like playing at the time.”

It was difficult for the players to find their roles, but Coach Chupp said he struggled too with finding a solid rotation.

“From a coaching stand point, because of the kind of depth we had, it was difficult to find roles for guys,” he said. “Sometimes our rotations were figured out because our [post players] couldn’t stay out of foul trouble.”

Demant said he appreciates these difficulties the coaching staff faces throughout the year as multiple variables are factored into the equation.

“Basketball players often talk about rotations, but if a key player picks up two quick fouls, which seemed to happen a lot with our guys, those ‘rotations’ get thrown out the window,” he said. “As a coach, you need to analyze each game and make decisions on which players are going to give you the best opportunity to win.  This is often contrary to what the players see or think.”

In the course of the season, 11 of the 13 Maple Leafs on the active roster averaged 10 minutes or more in a single game, with eight of those 11 players averaging 14 minutes or more. There are 40 minutes in a collegiate basketball game (two 20-minute halves).

“We never got a chance to flourish the way we could have,” said Small. “I’m not saying that us five should play all the time; but I feel like a smaller rotation could have helped us get used to playing with those guys more and more. You can really develop tendencies, but when you’re playing with so many guys, it’s hard to do that.”

For the Maple Leafs, next season will feature  a new leading scorer (Chandler led this year, with 13.5 points per game); a new leader in assists (Pratt recorded the most on the team, with 95 for the season); and a new leading rebounder (Betcher  recorded 6.4 rebounds per game). The five players who are transferring were accountable for 58 percent of the offense, 60 percent of the assists, and 47 percent of the rebounds that the Leafs averaged per game in the 2011-2012 season.

Meanwhile, Chupp said he is gearing up for his sixth season as head coach: “My focus is on our returning players and incoming recruits. We have several returning seniors, and our expectations are they go out with an outstanding season.”

The five transfers are still uncertain about their plans for the 2012-2013 season, but all have schools in mind.

Small and Betcher transferred to Goshen this year from Kalamazoo Valley Community College. For his fourth year, Small said he is considering Indiana Tech, among other schools, but added, “I don’t want to transfer.  You know, the thought of transferring again isn’t fun.”

Pratt said he is considering “a couple Division III schools,” along with Madonna University in Detroit.

The other three players are also undecided but have schools in mind.

The players leave with a supportive word from Chupp.

“I wish these guys nothing but the best,” he said. “It is my hope that they find somewhere they can be successful, both in the classroom and on the court.”