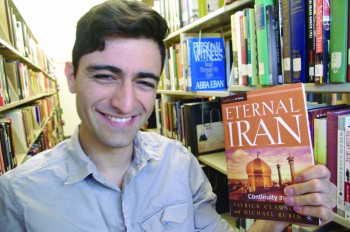 Mohammed Rasoulipor is a senior art major and member of the International Student Club. His first time coming to the United States was in fall 2009 when he enrolled at Goshen College.

Facts about Iran (in a box):

I miss the bread. The bread feels like home because it is an important part of breakfast. We have breakfast with sweetened black tea, bread and cheese (sometimes with walnuts). I also miss my grandmother’s olive tree and fig jam.

2. What do you like and dislike about living in the U.S.?

I both like and dislike the passiveness of people. The culture here [at Goshen College] is very passive, sometimes it gets boring and one doesn’t get criticized. This perhaps makes its tough to make progress if everybody is always nice and not critical.

I still have some of the unsafe feeling of not being at home. My mind is not at peace. There are things that I am not afraid of at home because everything is taken care of. I think it is also because my family is not around most of the time. These are not what I dislike about this country, but these are things that make it hard for me, living away from home

4. What is your favorite childhood experience?

My favorite experience was going to my grandmothers’ house in the summertime near the Caspian Sea. We picked fruits and hung out with the extended family and ate lots of olives, cherries, hazelnuts, figs and other local, northern Iranian food and sweets.

5. What did you think about the U.S. before coming here?

I can’t recall clearly, but I remember my grandmother telling me that it was dangerous and I had to be careful, that everybody carried guns and that I should watch out for AIDS and other diseases in the “West.” My other grandmother criticized my father for sending me here because it was a “secular and godless place.” You know, they watch too much of the national TV.

6. What inspired you to come here?

Getting a foreign experience, getting to be fluent in English and making “foreign” friends.

7. Difference between the U.S. and Iranian cultures?

I remember sitting in Jo-Ann Brant’s class when she was talking about the culture of “honor and shame” at the time of Jesus. I think that explains exactly how we [Iranians] base our ethics and actions. It is honor and shame that matters in Iran, as opposed to the culture of utility.

8. What do you want people to know most about Iran?

It meets my expectations just enough if people know that Iran is not Iraq.