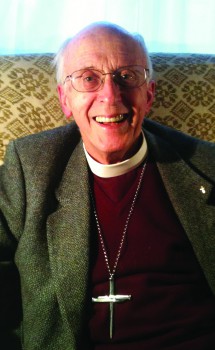 Goshen College will celebrate its 144th commencement on April 22nd and will welcome Bishop Simon Barrington-Ward as the commencement speaker. Barrington-Ward will present “Becoming What You Are: Exploring the Great Exchange” to the 210 undergraduate and 23 master’s degree candidates who are prepared to receive diplomas in the Recreation-Fitness Center.

Barrington-Ward, a recipient of bachelor’s and master’s degrees from Magdalene College, University of Cambridge, was initially connected with Goshen College in 2001 when a ’73 alumnus, previously employed by Barrington-Ward, realized the Goshen College Arts in London course would be visiting Coventry Cathedral, at which Barrington-Ward was bishop. The group met with him and there has been a course connection ever since.

Throughout his life, Barrington-Ward has served as Crowther Hall principal at Selly Oak Colleges, General Secretary of the Church Mission Society, and as the bishop of Coventry until 1997. Since then he has been appointed Knight Commander of the Most Distinguished Order of St. Michael and St. George and holds honorary positions on several campuses. Barrington-Ward is currently charged with the pastoral care of the University of Cambridge. In addition to his experience within the church, Barrington-Ward has written numerous books concerning the Christian experience.

A baccalaureate service will be held prior to commencement in the Church-Chapel for graduating seniors and their families. It will begin at 11:00 am. In addition, the graduation weekend will include various receptions hosted by the academic departments for students celebrating the completion of their majors.