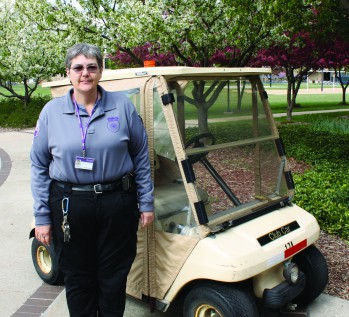 “Three minutes hon!” she warns the last student in the Leaf Raker at 8:57 on a Thursday night. Her keys, 14 on a single key ring, jiggle as she walks around in her Goshen College Security uniform (grey shirt and black pants).

Anderson’s lock-up routine begins at 8:45 every night. She starts off at the Leaf Raker and fills up her orange water bottle with diet Pepsi, saddened that the soda machines on campus don’t offer diet Coke, her favorite drink. She then continues to the Science Building, the Administration Building, and the cafeteria.

When she is done locking up the building on campus, Anderson takes a break and drives to an unusual place: a little pond across from the Recreation Fitness Center.

“This is where my ducks are,” she says proudly as she looks over the little patch of water, at the edge of campus.

For the past year, Anderson has been coming to this little pond every day to feed her ducks with bread she brings from home. Every time she comes, she makes a noise to let them know she is there. At first, she says the ducks were scared and would fly away, but after a while, they started recognizing her and would even come to her golf cart looking for bread. “I love doing this,” Anderson said. “This is one of my relaxing times.”

Anderson’s favorite part of the job, however, is not the free diet Pepsi re-fills, the occasional ice-cream treats, or her ducks: it’s the students, she says, that make her job the most enjoyable. She loves chatting and getting to know them as well as learning about their cultures.

Smiling and sipping diet Pepsi from her orange water bottle as she cruises across campus in her carat, Anderson seems the picture of contentment. Her life, however, wasn’t always this way.

She grew up in Geneseo, a town of 6,480 people in northern Illinois. She lived on a farm house with her parents and two siblings on $131 a week. Her dad worked at a local farm and grew Christmas trees, while her mom stayed at home and took care of the children and the house. The family contended with poverty every day, except on Christmas, when it seemed to disappear.

“Our Christmases were huge and fantastic,” Anderson said, her eyes widening with excitement.  “We were given so much at Christmas.” The Barbie dolls she would usually get didn’t do her justice; as a tomboy she was longing for her brother’s trucks, cars, mini bikes and Lincoln Logs. “He [my brother] had such cute toys and I had stupid Barbies,” said Anderson, laughing. She would usually steal her brother’s toys and make airplanes and Ferris wheels out of the Lincoln Logs.

One of the hardest times in Anderson’s life came 12 years ago. At that time, she had just become the foster parent of her grandson Adam. She loved every second of it. “Adam and I had a really close relationship,” Anderson said.

She was Adam’s “mom” for two years until the courts decided it was time for him to go back to his real mom. Anderson was devastated. “I went from being with him every day, to once a month,” she said. “It was like somebody took my own child away from me.”

Scarcely unable to deal with this tremendous sorrow, Anderson says she would have taken her own life if it weren’t for a sudden appearance.

On a hot summer day, she called her church pastor and 15 minutes later, she found herself sitting in his office, praying and talking to him for more than two hours. She prayed for her pain to go away and cried as they talked. That day was a crossroad in Anderson’s life. “I was either going to totally walk away from God, or I was going to follow him,” she said.  She chose Him.

Since that day, God has worked in mysterious and wonderful ways in Anderson’s life. She ended up holding her mom’s hand on her death bed, although they lived 1,600 miles away.  She was also able to tell her father that she loved him for the last time when she called him three hours before he died of heart attack. Anderson sees God’s work in these family miracles.

The many hardships she had to endure, Anderson understands as God’s test of her strength and sturdiness. “My mom told me that God doesn’t give me what I can’t handle,” she says.