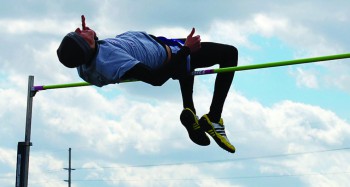 Despite a five-week hiatus, the track teams scored 33 top-ten finishes Saturday at the Dick Small Invitational in Defiance, Ohio.

Two of Goshen’s first-place finishes came in long-distance events. Karla Folker, a junior, won the women’s 5,000 meters in 20:55.93. Smeltzer, a first-year, took top honors in the men’s 10,000, finishing in 34:14.6. Folker was followed by a pair of sophomores, Alli Beitler and Jenica Corbett, who finished third and fourth. Andrew Witkowski, a sophomore, and Alex Rodriguez, a first-year, rounded out a Maple Leaf sweep of the top three 10K spots.

The men picked up another sweep of the first two places in the high jump. Sam Jones, a junior, and Kyle Mishler, a sophomore, both cleared 6’2¾.” Thomas Leonard, a first-year, was fifth in 5’8¾”.

Aside from the 5,000, the women did not place a runner higher than fourth – Maria Jantz, a first-year, with a pole-vault height of 9’2¼”. A trio of Maple Leafs finished fifth: Bethany Lemler, a junior, in the 100 meters; Sonia Navarro, a junior, in the javelin; and Summer Hasan, a senior, in the long jump.

The Maple Leafs’ most noteworthy event took a week off. One female and three male race walkers qualified for indoor nationals, but they were not at the Small Invitational: Defiance, as a member of the NCAA, does not sponsor the race walk.

Despite the relative lack of top-four finishes, Goshen’s women still amassed 52 points, good for fifth among competing schools. The men were fourth with 85½ points.

Both the men and the women are in action again this weekend. The Maple Leaf Invitational will be held at the Eigsti Track and Field Complex on the Goshen campus. Field events and race walking will begin at 11 a.m., followed by the 3,000-meter steeplechase leading off the running program at approximately 11:30.